It’s no longer appropriate to say there’s an automotive sales war being waged between the Kia Soul and Nissan Cube. Clearly Kia’s okay with allowing the Nissan Cube to live on – the Cube isn’t dead (yet) – but the Soul has become such a fixture of the North American highway scene that it’s been flirting with Best Selling Cars lists for the last few months. Sales of the 2010 Nissan Cube were down 64.2% in August. Sales of the 2010 Kia Soul jumped 9.3%.

There are other vehicles for sale in Canada which aren’t so easy to classify, either. At GoodCarBadCar.net, we call them Niche Cars, Niche SUVs, and Niche Trucks. They aren’t necessarily incredibly unique, but they aren’t direct competitors of vehicles mentioned in other Sales Stats Graphs. Apart from the Kia Soul, August wasn’t a good month for these vehicles.
Consider the hybrids from Toyota and Honda. Prius sales plummeted 73.8%; Insight sales rose by a meager 5 units to a paltry 66. Chevrolet HHR volume declines 30% from August 2009. The now defunct Chrysler PT Cruiser went from 102 sales last August to 2 sales in August 2010. Sales at BMW’s Mini division fell 14.7%. Mercedes-Benz’s smart car posted a 35.4% drop, slightly worse than the 34.7% drop in Volkswagen New Beetle volume.
Niche trucks and SUVs fared better in many cases. Jeep grabbed 1054 Wrangler customers in August 2010; up a fair bit from 491 in August 2009. The Toyota FJ Cruiser, Chevrolet Avalanche, Honda Ridgeline, and BMW X6 all sold at greater rates than in August 2009. Check the details in the Graphs below. 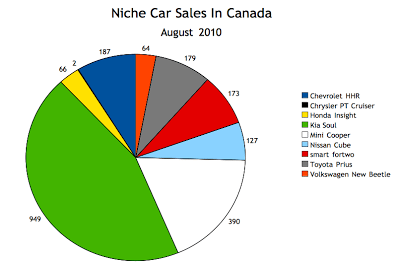 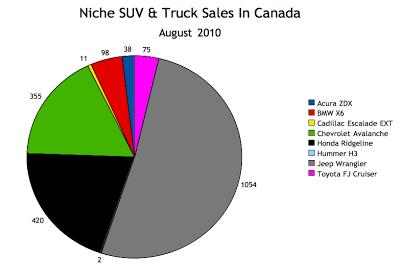