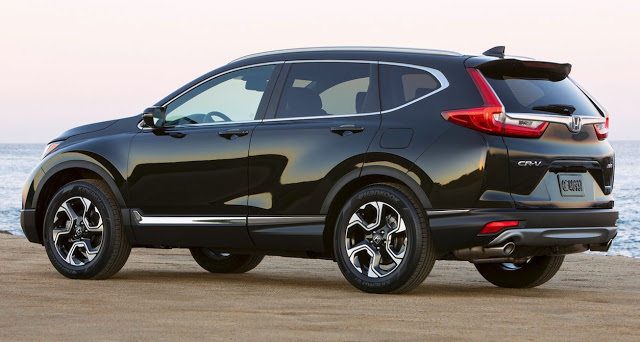 After the Toyota RAV4 finally knocked the Ford Escape off its its Canadian SUV sales leadership throne in calendar year 2016, the Honda CR-V was Canada’s top-selling SUV/crossover in January 2017.
The first month of 2017 marked the first full month of availability – albeit somewhat limited availability in many trims and many regions – for the fifth-gen CR-V. Sales of the CR-V jumped 40% to 2851 units, an all-time January high.

The CR-V led an SUV/crossover sector that jumped by more than 11% to nearly 48,000 units, equal to 43% of the overall new vehicle market. Together, the CR-V and its four top-selling rivals – account for nearly three out of every ten SUV/crossover sales in January 2017.
Canada’s top-selling premium utility vehicle in January 2017 was the 25th-ranked Lexus RX, sales of which rose 6% to 554 units. The RX, like the top-ranked Honda CR-V and third-ranked Toyota RAV4, is built in Canada.

Among vehicles that produce meaningful volume, the Buick Encore’s 85% jump was significant, as was the Kia Sportage’s 74% leap to 730 January sales.

Reminder: these are January 2017 rankings, but you can sort vehicles by January 2016 volume by clicking the January 2016 column header, or you can rank vehicles by improvements or declines using the % columns.
Or, most importantly, you can list automakers together by selecting the SUV/Crossover column header. At any time, click the Rank column to return to the original format. If you’re on a mobile device, you may need to choose the full version of the site (at the bottom of the page) in order to use the sortable function.
Canada Pickup Truck Sales By Model – January 2017
Canada Minivan Sales By Model – January 2017
As always, you can find historical monthly and yearly sales figures for any of these vehicles by selecting a make and model at GCBC’s Sales Stats page. Mobile users can now thumb across the table for full-width access.
Click Column Headers To Sort • February 2017 • December 2016 • January 2016
Source: Automakers & Global Automakers Of Canada & ANDC
* Italicized unranked lines are nothing more than available breakdowns, already included in the model’s total, not in addition to the model’s total.
º Land Cruiser is a commercial vehicle in Canada.
Sales data for brands such as Ferrari, Lamborghini, and Rolls-Royce are unfortunately not broken down by model. estimates say sales for those brands in January were 20, 15, and 8 units, respectively. It is believed that Tesla sold 208 new vehicles per month in 2016.