The 2010 Toyota Prius was very nearly one of America’s best-selling cars in September 2010, falling about 800 units shy of the Chevrolet Impala. News has surfaced which shows Toyota is more intent than ever on expanding the Prius brand, an act which should have benefits on sales of the original Prius model. The Prius’s main competitor, meanwhile, sold once for every six or seven Prii sold in September.

In other uncategorized vehicle segment news, the Kia Soul continues to walk all over the Scion xB and Nissan Cube. Could the 2011 Nissan Juke throw a wrench into this trio? Who knows what the Nissan Juke can do? It’s so…. weird and so…. wonderful. The Volkswagen Passat CC continues to out-sell the “regular” Volkswagen Passat sedan and wagon; by better than 3-to-1 in September. The 2011 Volkswagen Passat has been unveiled, but what North America receives isn’t totally nailed down.
Jacked up off the ground, niche-market vehicles like the Toyota FJ Cruiser and Jeep Wrangler fared well in September 2010. U.S. sales of the FJ Cruiser were up 245% last month; Wrangler sales jumped by 1763 units. BMW X6 sales doubled compared with September 2009’s Sales Stats, but in contrast with the BMW X5, America’s best-selling European SUV, well, there’s no comparison. Smart buyers are chose the more intelligent vehicle 6.5 times for every misguided X6 purchase. 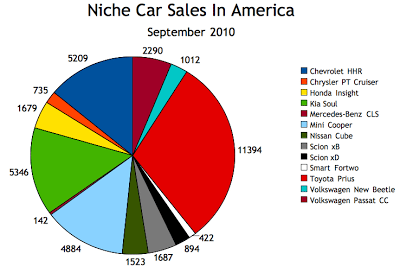 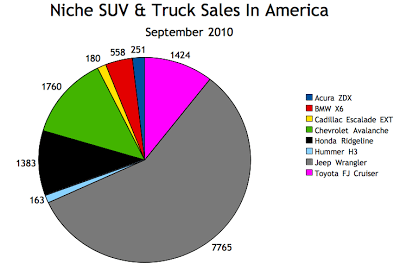