The Good Car Guy made a promise in early February: here are the results. A look at large mainstream sedans was basically a showcase of the Buick LaCrosse. The five vehicles in the Graph below are low volume sellers; vehicles which sell in varying levels of a rather high spectrum. Before you jump to declarations of the Infiniti FX35 and FX50’s combined dominance, keep in mind the nature of its pricing. Sure, the Infiniti FX outperforms the Acura ZDX, but a direct comparison with the Porsche Cayenne is nonsense.
Still, it must be clear that for all the attention these vehicles are paid they’re all relatively weak on the Marketplace. It’s also worth noting that two vehicles which will forever disturb The Good Car Guy – Acura ZDX and BMW X6 – are particularly offensive to the collective consumer eye. 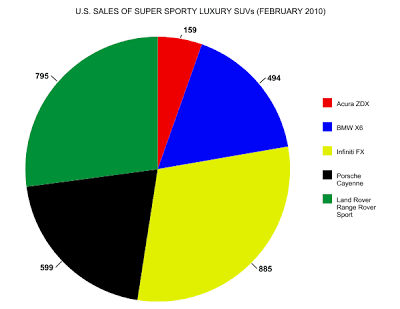