The charts below speak for themselves. Rather than go into detail explaining the data found therein, I’ll just briefly explain what you’re looking at.

In the first Graph, the red line shows the year-over-year monthly percentage increases and decreases in sales for Hyundai’s U.S. operations. The blue line – in contrast to Hyundai USA – shows the overall market’s percentage increases or decreases. Remember, for both charts, spikes in August of 2009 and declines in August of 2010 are directly related to the market inflation imposed by Cash For Clunkers and the correction of that same thing one year later.

In the lower Graph, you’ll find what you need to help understand the first chart, with a bit of perspective from 2008. This is where overall monthly volume is reflected in a line which either climbs or slips, but the contrast is more relevant on a north-south-by-month scanning than one which simply traces the line. After all, the whole market rises and falls depending on whether or not we’re in car-buying season.

Will Hyundai be able to continue outpacing the overall market? Perhaps that isn’t certain, but Hyundai stands a chance given their new product portfolio which includes the 2011 Hyundai Elantra and 2011 Hyundai Sonata Hybrid; a lineup which will soon include the 2012 Hyundai Veloster and 2012 Hyundai Accent. And there’s more, the low-volume 2011 Hyundai Equus helps, as does the Hyundai Sonata 2.0T. And Kia, Hyundai’s underling? Kia USA sales were up 18.7% in 2010 while the pair’s combined market share stood at 7.7% for the calendar year. 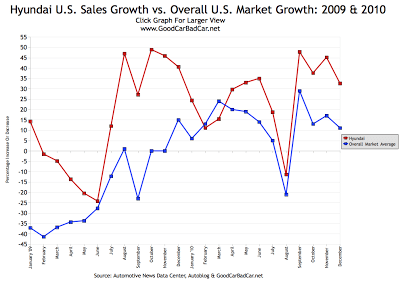 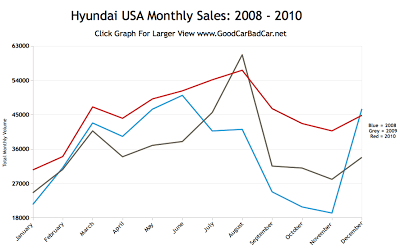