The Good Car Guy’s brief analyses on July 2010 auto sales in Canada have, for a change, concentrated on the weakest links. In the case of sporty car sales, however, it’s really hard to ignore the Hyundai Genesis Coupe. You could justifiably point out that compared with other Hyundais, Genesis Coupe sales are meaningless. Hyundai sold 1162 Sonatas in Canada in July 2010 along with 2733 Accents and 3223 Elantras. But the whole point of the Graph below is to display the Sales Stats might of certain sporty cars alongside the weakness of others. And here, the Hyundai Genesis Coupe certainly appears mighty.

For the record, GoodCarBadCar.net includes Volkswagen GTI sales when discussing the Volkswagen Golf in the Compact Car Sales chart. In July 2010, Volkswagen Canada sold 173 GTIs, up 66.3% from July 2009.
The BMW 6-Series may have a good July south of the border where the competition was absolutely crushed, but up here in Canada, the tasteless 6-Series is roundly rejected. 6-Series sales have fallen 68% through the first seven months of 2010. Mercedes SL-Class sales are off slightly (down to 172 from 178). Audi has lost 15 R8 sales (down to 71) compared to the first seven months of 2010. Jaguar XK sales are level, GT-R sales have nearly been cut in half at Nissan, and Porsche 911 sales have risen to the tune of 1.5%. 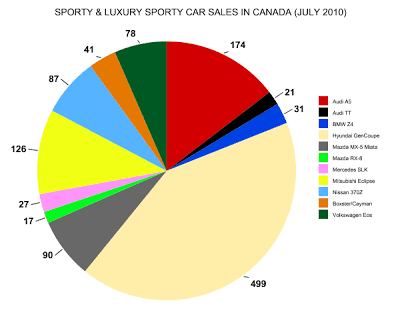 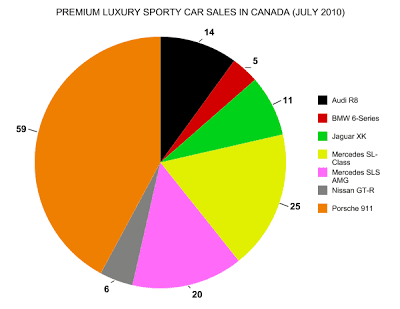