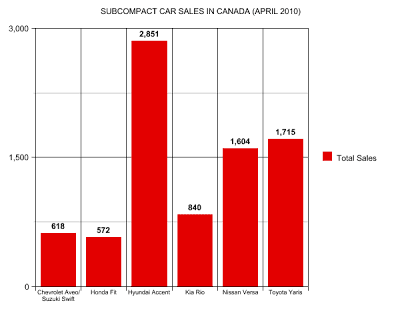 Profiled as one of Canada’s Top 20 new car deals this week, the Hyundai Accent is racking up sales like there’s no tomorrow. What does this say for the potential of the next Hyundai Accent? It’ll be more stylish and more refined; probably more fuel efficient and more powerful. But…. the Ford Fiesta and Mazda 2 will be new rivals in the sandbox.

The Accent’s total Canadian sales figure in April was enough to propel it to #5 on Canada’s Top 10 Best-Selling Cars list. Hyundai has actually watched Accent sales slip slightly in 2010, but sales of the Honda Fit have fallen, too, and Toyota Yaris sales have slipped, fallen, broken necks, and severed limbs. Yikes. After four months of 2009, 9,795 Toyota Yarises (Yari?) had been sold. Through the first third of 2010, 5,896 Yaris sales appears downright abysmal. Better to be a Yaris salesperson than a seller of Suzukis – only 6 Swifts were sold in April.