Hyundai’s market share dominance in the subcompact car category in Canada each and every month, in September most obviously here, isn’t enough to overcome the Honda Civic in Canada’s overall small car arena. Even when the Accent’s sales totals were paired with the Hyundai Elantras for September, Hyundai only tallies 5206 sales. Honda meanwhile, sold nearly 6000 Civics plus a few hundred Fit hatchbacks. Toyota, on the other hand, threw down with its Corolla/Matrix tandem. Even then, however, when paired with the Toyota Yaris, Toyota’s small car trio couldn’t even out-sell the Civic.

What about Mazda? The new 2011 Mazda 2 is starting to collect itself, but the Mazda 3 had a rough month in September 2010. Sales of Mazda’s most popular vehicle were down 12%. Together, the Mazda 2 and Mazda 3 grabbed only 4350 customers. 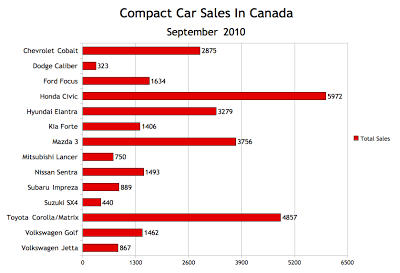 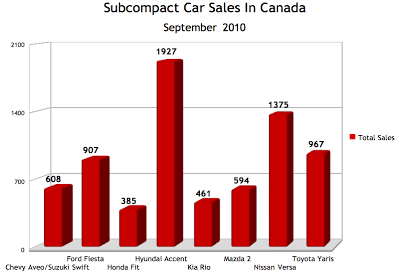