For the vast majority of automakers, victory isn’t everything. Being able to say, “We sold the most _____”, doesn’t feel quite as good as making trunkloads of money. Don’t worry your pretty little head off – Dodge will forever be inclined to proclaim the Grand Caravan as Canada’s best-selling minivan. But take into consideration the percentage of 2010 Dodge Grand Caravans which were sold to fleets (likely at no profit to Chrysler) and the rest which went to regular consumers with around $7,000 in incentives, and you begin to see Honda’s contentedness.

See, every time Honda sold an Odyssey in Canada in July 2010, Chrysler/Dodge sold five minivans and 65% of the sixth van was out the door. But while the base price of a Dodge Grand Caravan had plummeted to $20,945, the $31,690 Odyssey wasn’t likely much cheaper than $26,000.
You might also be interested to know about a few minivan competitors not in this Graph because, well, they ain’t minivans. Toyota Venza sales were 1,045 in July. 464 units of the Ford Flex were sold in Canada in July. Dodge Journey sales reached 2,268.
As for muscle car sales in Canada, only the best-selling 2011 Ford Mustang posted a decline in sales compared with July 2009. Camaro sales shot up 49%; Mustang sales fell from 898 to 880. 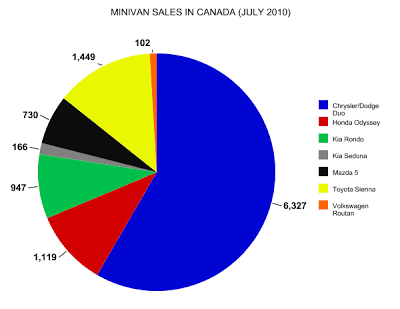 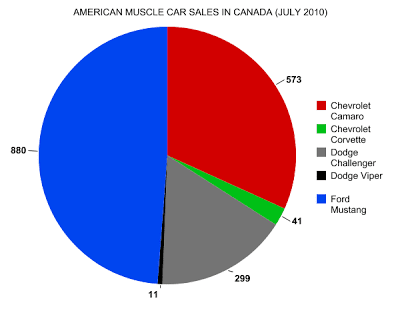