Lacking in safety features and aging faster than Liza Minnelli, the Hyundai Accent still has no trouble out-selling its direct rivals, including the all-new to North America 2011 Ford Fiesta. Dealers say they could sell more Fiestas if only they had more to sell, but could Ford Canada have sold an extra 1766 in August to unseat the Accent? Doubtful. Ford surely isn’t worried. The average Fiesta transaction price is certainly thousands higher than what Hyundai’s getting for the Accent.

Hyundai isn’t struggling in the larger segments, either. The 2011 Sonata was the only non-small car to place in Canada’s Top 10 Best-Selling Cars list and the Elantra finished ahead of the Toyota Corolla, as well. Keep this in mind: if Toyota called the Matrix the “Corolla Touring” you wouldn’t even see the split in Corolla/Matrix sales (joined in the Graph below, separated for Canada Best Sellers lists, always joined for U.S. Sales Stats). And if Hyundai called the Elantra Touring by some other name, the two cars wouldn’t be joined and the Elantra sedan would have only possessed 2350 sales in August 2010 in Canada.
Forsaking unnessary hypotheticals, check out the Sales Stats on subcompact cars and compact cars in Canada from August 2010 in the accompanying Graphs. 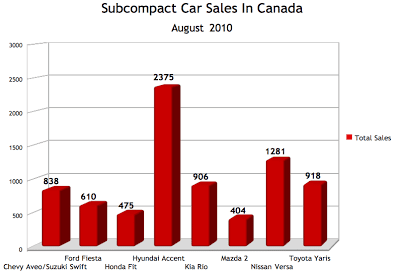 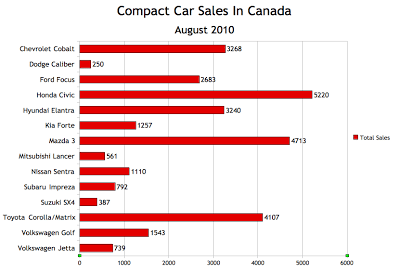