News that Volkswagen will forsake the Rabbit name in North America once and for all smells of the recent induction of the Ford “500” nameplate to the shredder. Attempting to rehash good ol’ VeeDub values with an 80s name like Rabbit didn’t bring more success to a car that ought to have been called – and will be called in 2010 – the Golf. Ford, on the other hand, wanted to rid themselves of a dying nameplate and came up with 500 as a way to invite new customers to the brand. Ford found out that, apparently, they should have just stuck with Taurus. 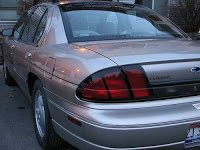 Now it’s time for General Motors to rethink the naming process. The relatively recent switch from Cavalier to Cobalt allowed our minds to escape from years of a dreadful compact. But now GM wants to return our minds to a time when the massive automaker wasn’t in the financial doldrums. Rather than install Cruze, as was preordained, on the back of the next GM small car, Chevrolet will turn back time and roll the dice with Cavalier again. Hmm. Outside of North America, Cruze will be Cruze.
That’s not all. Despite its status as North American Car of the Year, the “good” Malibu (as opposed to the version we were served in the late 90s up until 2007) is symbolic of the new GM. You know, the GM that’s forever having money problems. Sources say GM has come to the conclusion that buyers want to think positively, and despite a blaa relationship with the Chevrolet Lumina of ’90-’01, that badge will replace Malibu effective as of the 2010 model year. Those cars should start to roll off the line soon.
Ah, but here’s the kicker. Remember when the Pontiac Aztek wasn’t a symbol of Rick Wagoner’s malpractice but was simply an ugly SUV joke inside a company that was surviving? Well, new CEO Fritz Henderson figures that GM will look financially stable if they can appear to devalue a vehicle. Thus, the Pontiac Vibe and Torrent will become the Pontiac Aztek and Pontiac Aztek Grande. With the Italian pronunciation.
Moreover, rumours are starting up about potential production cost savings which would arise by actually building the old cars. All the engineering is done; the commercials have been produced. Plant retooling would be easy. Beyond turning the Cruze into the Cavalier or the Malibu into the Lumina or the Vibe and Torrent into the Aztek and Aztek Grande, reinstalling the old Lumina and Cavalier and Aztek into the lineup could be real money savers. So they say.
UPDATE 12:01: April Fools 🙂