Indeed, there was a great levelling off among small luxury utility vehicles in Canada last month. Compare the first graph’s evenly-cut pie slices with the long and short bars in the Graph below for a better understanding. Sure, the $44,950 Land Rover LR2s weak performance pales in comparison to the $43,500 Mercedes-Benz GLK350 4Matic’s continued success in Canada, but the LR2 was only 67 units behind the $39,995 Volvo XC60. And the XC60 was less than a hundred sales from the $41,250 Infiniti EX35; the Infiniti trailing the $41,200 Audi Q5 by a virtual handful of customers. Even then, from fourth position to second, the $41,780 Cadillac SRX is in tight with the soon-to-be-replaced $39,900 BMW X3; a model only six sales behind the $39,990 Acura RDX. Okay, so the GLK won – but this is fiercely competitive stuff.

How unlike the stuffed-full mainstream small SUV segment, then. Although there are seemingly thousands of competitors, the 2011 Ford Escape’s effective base price of $19,999 certainly makes life difficult for its rivals, even successful utility vehicles like the Hyundai Santa Fe, Honda CR-V, Toyota RAV4, and Chevrolet Equinox. You’ve heard of GM’s success with the 2010 Chevrolet Equinox and 2010 GMC Terrain? Combined sales of those two were 2109 behind the Escape’s sales total in September 2010. 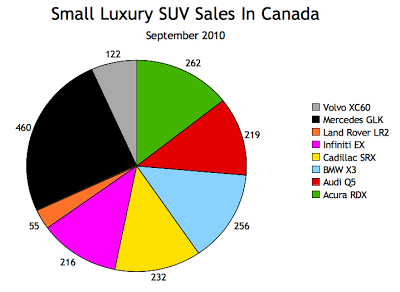 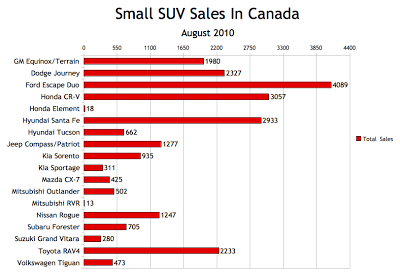