Alongside the Ford Flex, Ford is also selling a 3-row CUV called the Explorer. You may have heard of it.

So in glancing at the Chevrolet Traverse vs Ford Flex comparison below, it’s not a bad idea to include the Explorer’s 3734 sales, a figure that’s dropped significantly from the 4450 sold in the United States in September 2009. Of course, once the 2011 Ford Explorer is fully on-line, Explorer sales could rise. The Good Car Guy is likely to change the makeup of this Graph, as well.
But why are we talking about this, after all? Aren’t the more interesting topics to the western side of this group of Sales Stats? Indeed they are: the Chevrolet Camaro out-sold the Ford Mustang again, growing its year-to-date lead over the Mustang to 7654 units. And yes, the Malibu out-sold the Ford Fusion – again – which is interesting. And yes, Ford F-Series sales jumped 40% in September, making it really difficult for Chevrolet to do anything about the 26K unit difference between these two gigantic American car brands. But. I. Digress.
The 2011 Jeep Cherokee absolutely whipped the Chevrolet Traverse and the Ford Flex. Combined. Grand Cherokee sales leapt 95% to 10,915. All the data’s yet to come in, but it appears as though the Grand Cherokee will be joining the Wrangler (or pushing it off) America’s Best-Selling SUVs list. Now that’s news, the kind of story that almost makes this Graph a Chevrolet vs Ford vs Jeep showdown. The Jeep Grand Cherokee is back. And it does look good in black. 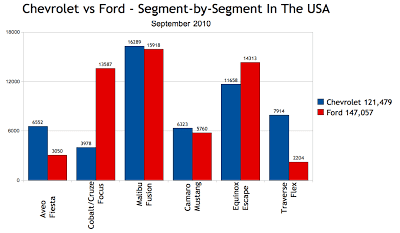