Back on top with resounding Sales Stats in June 2010, the Ford F-Series conquered Canada with a 26.8% increase over June 2009. As seen on GoodCarBadCar.net already, the Ford Escape finished the month with a dominating victory among utility vehicles while the Focus and Fusion both finished inside the top 7 among Canada’s best-selling cars. Things are very, very good for Ford Canada these days. GM’s trucks knocked the F-Series down a peg in May – but no longer will Ford pickups stand for such injustice.

And look who’s paying a visit to Canada’s best-selling trucks Graph….. it’s the Toyota Tundra. GM’s tiny trucks couldn’t hang on for a second consecutive month; the Toyota Tacoma had a chance; the Honda Ridgeline didn’t; and the Tundra squeaked through. Stuck in the middle yet again is Dodge’s Ram truck. Or the Ram. Or is it Ram Truck? Whatever. The antiquated Ford Ranger fights its way on routinely with a low, low price. Then again, most of these other trucks are available with thousands and thousands of cash back in incentives. 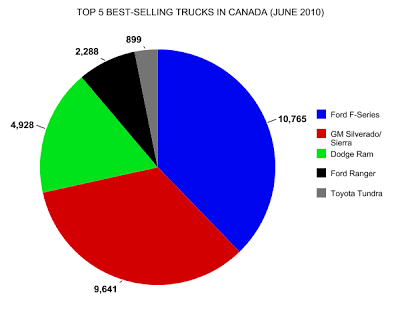