There are tens of thousands of casual auto industry observers (and experienced automotive critics, too) who are under the strong impression that price is not part of a vehicle buyer’s decision making. They’re completely right…. at least when discussing certain vehicle segments. Price is irrelevant to the buyer who can’t decide between the Ferrari 458 Italia and the Lamborghini Gallardo. Price may only be partially relevant to the loyal Michigander whose truck lease is about to expire. But when it comes to the buyers of minivans in the great nation of Canada, price matters.

Chrysler sells minivans with two different names in Canada. First, there’s the slow-selling Chrysler Town & Country, just 449 sales in June. It’s at least the Dodge Grand Caravan’s equal in the States, but the Grand Caravan is Canada’s favourite. Combined, their June 2010 sales were worth more than half of the minivan pie. As of this moment, Dodge.ca lists the Grand Caravan’s base price at $20,945. Few would argue that the Honda Odyssey isn’t the better van, but Odysseys start at $31,690. The Odyssey was Canada’s fifth-best-selling minivan in June 2010. The four which sold more all have a lower base price.
Muscle cars tell a slightly different story. Only slightly. Now that the 2011 Ford Mustang is on stream, its fast and cheap V6 versions are attracting consumers faster than Chapmans Li’l Treats on a hot summer’s day. It doesn’t hurt that the Mustang 5.0 GT is a fair deal, too. Or that the Chevrolet Camaro costs more. 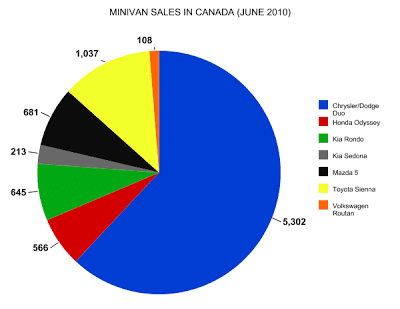 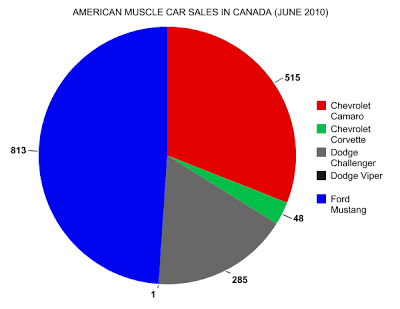