Each and every month, Americans (and residents of the United States of America) purchase pickup trucks in quantities deemed unbelievable, unbelievable, and probably illegal in most foreign countries. Although typical sales volume in September 2009 wasn’t all that great, the fact that each of the five trucks in the Graph below improved on their September 2009 totals would be disturbing to residents of, say, Great Britain or France. Or Japan.

The Ford F-Series, America’s long-time favourite vehicle of any kind, posted an improvement over September 2009 of 40%. For the record, September 2009 was better for the Ford F-Series than September 2008. The Chevrolet Silverado posted an even greater increase; up 65.9%. Its partner, the GMC Sierra, improved at a rate of 52.9%. The Dodge Ram, way back at “just” 16,887 sales, was up 26%. And those foreign trucks, the made-in-Texas Toyota Tundra and Tacoma, made gains of 9.7% and 18.1%, respectively.
Trucks aren’t dead. Without the Ford F-Series, Ford would’ve been #3 in U.S. auto sales instead of #1. Considering the excitement generated by Ford’s new V6-engines for the 2011 Ford F-150, sales could be ready to climb higher.
Details on America’s Top 5 Best-Selling Trucks from September 2010 are below. 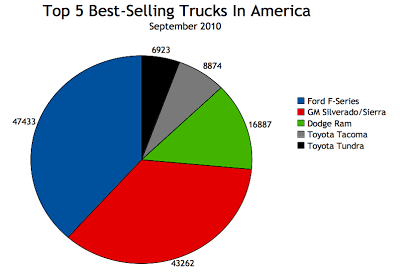