Comparing Canada’s penchant for purchasing small SUVs, crossovers, CUVs, and tall wagons with that of our neighbours to the south is an interesting task for one with time. The Ford Escape was Canada’s top-seller in April, as it was in the United States. Sales of the Chevrolet Equinox and GMC Terrain combined to be a strong force in the States. In Canada, the same could be said except for the strength of the Hyundai Santa Fe, Toyota RAV4, and Honda CR-V.

More applicable to the Canadian story on small utility vehicles is the CR-V’s ability to keep Honda close to level with its April 2009 sales. Accord, Civic, and Fit sales all declined in April of 2010; CR-V sales rose from 1,600 in the same period last year. At Chevrolet, where sales were also lower this April than last, the Equinox was a truly bright spot. Not often do you see an increase of 127% from a vehicle which wasn’t the slowest of sellers to begin with. 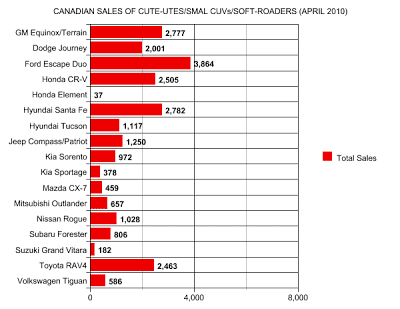