Ford Canada sales were boosted to the tune of 63.3% in September 2010. Chevrolet, on the other hand, was Canada’s fifth-best-selling brand in September as sales fell 4.6%. Dangerously close to Chevrolet was Korean brand Hyundai. Hyundai sales jumped 12.1% to 10,406.

Broken down by segment, then, Chevrolet stood little chance of competing with the Blue Oval of Ford Motor Company. The 2011 Ford Fiesta finally caught up and surpassed the Chevrolet Aveo. The Ford Fusion and Ford Escape each lad a walloping on their rivals, the Chevrolet Malibu and Chevrolet Equinox. The 2011 Ford Mustang expanded its lead over the Chevrolet Camaro. Only the deeply discounted Chevrolet Cobalt and relatively low-volume Chevrolet Traverse managed victories (among cars in GoodCarBadCar.net’s Chevrolet vs Ford Graph). The 2012 Ford Focus and 2011 Chevrolet Cruze make the current Cobalt/Focus comparison fairly pointless.
Chevrolet’s true loss, however, isn’t seen on the Graph below. Sales of the Chevrolet Silverado in Canada in September 2010 fell 45.6%, a loss of 2600 units. 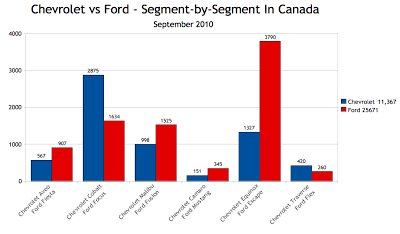