CHEVROLET vs FORD : BOWTIE vs BLUE OVAL – JUNE 2010 IN CANADA

Last month in Canada, Ford sold nearly twice as many new vehicles as Chevrolet. Chevrolet, by the way, was the second-best-selling auto brand in Canada in June. Indeed, June 2010 was an especially good month for the Blue Oval, and Ford Motor Company overall, its best month since May 2000. Through the first six months of 2010, both Ford and Chevrolet are ahead of their 2009 pace, Ford by 23,383 units and Chevrolet by 6,631. Yet Ford has clearly captured the hearts and minds of Canadian automobile consumers in almost every segment.

Ford’s pony car, the iconic Mustang, was the most popular muscle car of all in June. The Ford Escape was Canada’s best-selling utility vehicle. The Ford F-Series, responsible for approximately one-third of all Ford sales, is famous for being Canada’s favourite truck, even delving way back into history. One look at Canada’s Top 20 Best-Selling Cars list will tell you plenty about the Fusion’s favoured status – it was Canada’s highest-selling non-small car in June.
Of course, Chevrolet shares a lot of its glory with Buick, Cadillac, and GMC. Combined, however, General Motors was only good for 25,646 sales in June, including a few at Saturn, Hummer, and Pontiac. 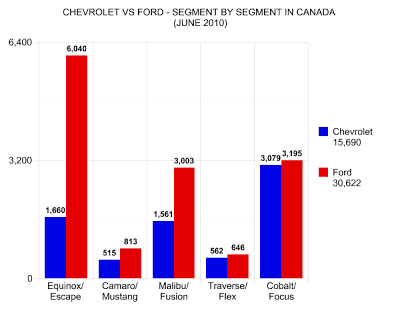