After the month of January saw the Mazda 3 surge out to an early lead in Canadian auto sales, the Honda Civic is chewing away at that 604-sale deficit in February. “Back on top” isn’t a strange place for the Honda Civic to find itself in Canada – it was the country’s favourite car in 2009.
Newer: Top 10 Best-Selling Cars In Canada – March 2010
February Sales Stats bear out Canada’s love for small cars. Not a single vehicle on this list could be called anything other than small or compact or subcompact. There’s no Nissan Altima this time around (as there was in January) and no Toyota Venza, either. Most prominent midsize competitors, vehicles like the Honda Accord, Toyota Camry, Ford Fusion, Chevrolet Malibu, and Hyundai Sonata, find themselves in the Top 20; not good enough to land a spot in the Graph below of the Top 10 Best-Selling Cars in Canada. 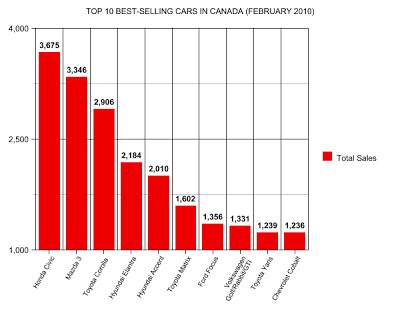