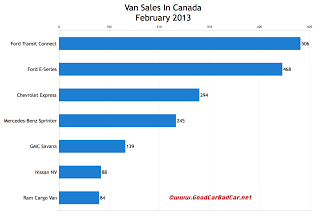 1824 new commercial vans were registered in Canada in February 2013, a 4.1% decline compared with February of last year.

The least conventional members of the group – a small Ford, big Benz, and the odd duck Nissan – all generated year-over-year improvements.

Click any model name in the table below to find historical monthly and yearly sales figures from both Canada and the United States, or make a vehicle selection at GCBC’s Sales Stats page.