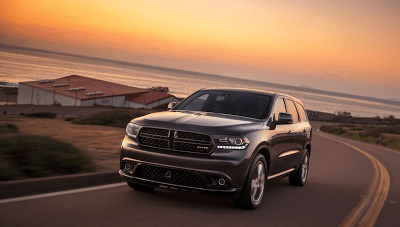 Sadly, the age in which we live leads us to often accept the notion of a tweet without even clicking the link to the story. But since I am usually interested in Mashable’s articles, as I’m sort of involved in freely displaying and analyzing car sales, and because I instantly questioned the theory behind the tweet, I dared to click the link to their brief story.

—
Mashable: “Since the ads first began playing, Durango sales
have increased by 59%, and web traffic has jumped 80%.”
—

I know nothing about Dodge.com’s Ron Burgundy-sourced Durango traffic. I do know that October sales of the Durango in the United States rose 58.5% compared with the same period a year earlier, and 3.1% compared with September 2013. Pretty good, huh?

A 59% year-over-year increase is nothing to sneeze at. Among SUVs and crossovers, only the Land Rover Range Rover, Subaru Forester, Nissan Pathfinder, Jeep Compass, Mitsubishi Outlander, Lexus GX460, Toyota RAV4, and BMW X1 reported more impressive year-over-year increases, on a percentage scale. (The Forester, Pathfinder, and RAV4 all sold more often than the Durango.)

The Range Rover, Forester, Pathfinder, Compass, Outlander, GX460, RAV4, and X1 didn’t have Ron Burgundy on their side, yet sales of those eight utility vehicles managed to increase dramatically. This leads us to believe that sales of a specific nameplate can increase for reasons not related to marketing; for reasons which may relate to production capacity, incentives, and the increased awareness that comes with time.

I’m not suggesting the Ron Burgundy ads aren’t effective. I’m certain they should be. If these ads can’t sell a Durango the way… ahem, Brooke Shields sells a Volkswagen Routan, they will definitely generate a conversation that is, hopefully, Durango-centric. The ads are easy to watch over and over again. They’re funny. They don’t ignore the product. (They were cheap to produce.)

This isn’t the first time GCBC has mentioned the once powerful Durango’s return from the abyss. In GoodCarBadCar’s coverage of September’s midsize SUV results, where we embedded an early Burgundy clip, you read the following: “For the eleventh consecutive month, U.S. sales of the Dodge Durango were better in September 2013 than they were in the equivalent month one year earlier. Chrysler doesn’t sell Dodge Durangos like they used to. In 2004, Dodge sold 137,148 Durangos. Afterward, Durango volume fell in 2005, 2006, 2007, 2008, 2009, and 2010 before rising to nearly 52,000 units in 2011 and falling again in 2012. Dodge has already sold more Durangos in the first nine months of 2013 than in all of 2012 and is on pace for 66,000 Durango sales this year, more than in any year since 2006. The Durango’s two-row partner from Jeep, the Grand Cherokee, is America’s sixth-best-selling SUV and sells nearly three times more often than the Durango.”

Yes, dozens of Ron Burgundy ads must have helped, and the best barometer of this will be the increased web traffic. One nevertheless wonders, if Ron Burgundy helped so much in October, what would have happened if his Durango commercials hadn’t aired? After all, even with the ads, Dodge sold fewer Durangos in October than they did in the summer. Even with the ads, the Durango’s year-over-year growth wasn’t as pronounced as it was in April, July, August, or September. (Recent history – a months-long trend – tell us that even without the ads, Durango volume wouldn’t have plunged.)

It’s very difficult to know what kind of impact marketing has on consumers before they choose a specific vehicle. I’m not going to blame Mashable for perpetuating a theme which has also been made public at Entertainment Weekly, AdAge, Automotive News, Bloomberg, and Time.

Naturally, Dodge is revelling, and they’ve used the word “absolutely”, but they’re not denying the existence of the recent past. Said boss Tim Kuniskis to Ad Age, “Durango sales have been very strong this year, and the Ron Burgundy Durango ads are absolutely building on that momentum.” Yes, building on momentum that existed before the ads debuted.

Again, I’m not for a moment suggesting that we won’t see an impact from this very low-cost, very good ad campaign. But we simply can’t know if we’re seeing that impact yet. And if we are currently seeing an impact, if we could know that we are seeing that impact in U.S. sales, the impact actually seems very small. Volume isn’t as high as it was. Durango sales didn’t grow as fast as they had been growing.

If Durango sales are skyrocketing, what’s happening to Pathfinder sales? Are they atmosphererocketing? Moonrocketing? Intergalacticrocketing? One thing’s for sure: it’s hard to get excited about the means behind the Pathfinder’s increase. Nissan’s doing it by, wait for it, allowing their marketing to focus on the Pathfinder. Booooring. But undeniably effective, so far. In conjunction with the release of a new Pathfinder. And increased production. And lower prices.