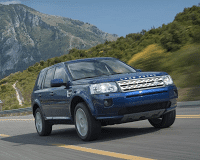 A decision has been made. The Good Car Guy’s analysis of Canada’s July 2010 auto sales picture will, more often than not, concentrate on the basement dwellers, not the inhabitants of skyscraper penthouses. This is normally the place where I expound to you the might of Ford Escape sales, the month-after-month small luxury SUV domination by the 2010 Mercedes-Benz GLK350 4Matic.

Instead, let’s ask what’s wrong with the Honda Element…. er, “What’s wrong with the Honda Element?” We could clear this up quickly by saying, “Nothing”, but that wouldn’t be completely true. The Good Car Guy has always been more of an Element fan than a recommender of the Honda CR-V. The Element’s style, however, didn’t match the average consumer’s taste in 2003. Even cleaned up as it is, the 2010 Honda Element still doesn’t suit the stylistic fancy of Mr. and Mrs. Small CUV-Buyer. Besides, the all-wheel drive Element guzzles more fuel than all-wheel drive versions of the Toyota RAV4, Ford Escape, and the all-new 2010 Hyundai Tucson.
1,990 potential Land Rover LR2 buyers either ignored the Indo-Brit SUV completely in July or thought about, perhaps drove it, might have even run the numbers on it, then forgot about it. Out of the 2,023 people who acquired a new small luxury SUV in Canada last month, only 33 went with the Land Rover LR2. Let’s be honest: while GoodCarBadCar.net would consider recommending the Honda Element over many of the larger-volume mainstream sellers, the Land Rover LR2 isn’t given the same nobody-loves-you-but-me spiel. The Audi Q5 is awesome. The Mercedes-Benz GLK is gorgeous. The Acura RDX handles well. Cadillac’s new SRX is dramatic. Though over-nannied as much as an aristocrat’s grandchildren, the Volvo XC60 is handsome and capable.
For details on the sales of small SUVs and small luxury SUVs in Canada in July 2010, check out the Graphs below. 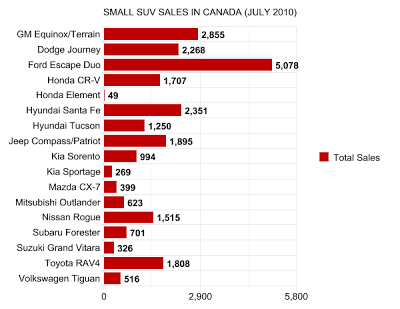 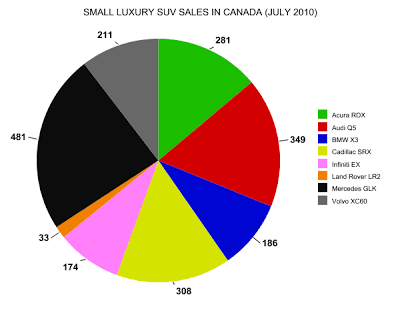