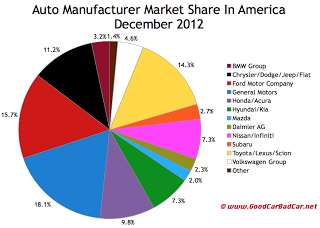 December 2012 and 2012 year end U.S. sales figures for every automobile manufacturer competing in the United States were reported throughout the day today, January 3, 2012. Early numbers from Hyundai and the Chrysler Group had us believing in yet another strong December. A year ago, sales rose 9%. Sales rose by more than 8% in December 2012.

While updating this December 2012 post, which includes year end numbers, GoodCarBadCar.net also posted to this 2012 Year End U.S. Auto Sales Brand Rankings post. Yes, the numbers are the same, but brands will be ranked by 2012 twelve-month totals, not by December figures as they are here.

As always, you’ll find model-by-model totals by selecting a make or model at GCBC’s Sales Stats home. Yearly figures go back a decade; monthly data stretches back to 2010. GCBC will soon publish December and 2012 best seller lists for cars, trucks, and SUVs.