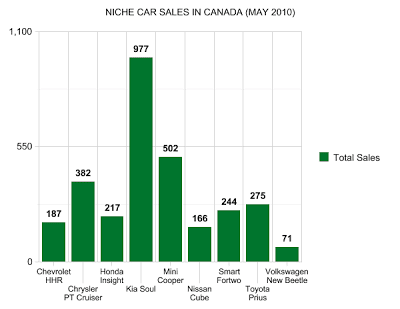 Strangely, the abject failure that the Honda Insight is in the United States has not produced failure in Canada. That’s not to say Canadian buyers always follow their American neighbours, not at all. It’s also worth pointing out that the Insight’s Canadian success is purely relative; as compared with the Toyota Prius. But the Prius, in Canada, has nowhere near the hybrid sway it does in the USA. So is the Honda Insight doing well in Canada? Uh…. no. Civics are more than 20 times as popular, for context. But is the Honda Insight within reach of the Toyota Prius in Canada? Yes, and that’s not something that can be said by American Honda dealers.

The gap between Kia’s Soul and the Nissan Cube is about as wide as it’s ever been. Though GoodCarBadCar.net would’ve been glad to acquire a free Cube through the hypercube competition last year, it’s not surprising that the Soul’s pricing strategy, mixed with superior design and all-around Kia momentum is helping Kia conquer Nissan with ease. Come fall 2010 and Scion will try and throw a wrench into the Canadian boxy hatchback market with the xB.

As far as larger niche vehicle products go, don’t we all just want a Jeep? Yes, apparently we all do. 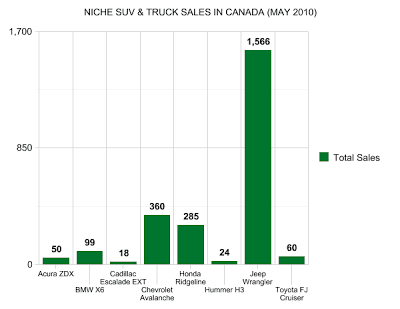