One would imagine that, in a sector beholden to style and image, the best-looking car would sell the most; the worst-looking car would sell the least. But you’re forgetting that image, when tied to style, also revolves around that which is newer and brighter and bolder and brasher. Many’a styling guru would hold fast to the notion that the Mazda RX-8 is a tremendously gorgeous automobile. However, the Mazda RX-8 is now an aged wonder. Plus it suffers from consumption, of the oil and gas variety.

What happened to the Audi TT? The TT’s lack of a retractable hardtop can’t be helping, but the TT isn’t the fresh face it was last decade, not even with a handsome remake a few years ago. Thus sales have taken a dip toward the abyss, down 7.1% in May; down 7.7% year-to-date.

Then you have a car like the BMW Z4. Recently redesigned to include a retractable hardtop, a redesign which also made the Z4 a looker rather than a look-away, is partly credited for improved Z4 sales. In May, the Z4 posted an increase of 29%. Through the first five months of 2010 sales are up 226.8%. Indeed, the Z4’s May sales figures were almost as high as Z4 sales through the first five months of 2009. Beautiful, capable, and new… that’s how you sell in this segment. 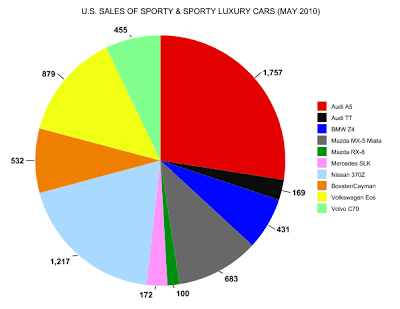