SUBCOMPACT AND COMPACT CAR SALES IN THE USA – JUNE 2010

Nobody grows up hoping to one day sell the least-expensive, least-profitable product on the market. When a business case is made, however, anyone and everyone will jump at the opportunity. With increasing frequency, the subcompact car class in North America is seeing new models or rejigged old models. With the Fiesta, Ford is back in the segment for the first time since the…. *puke*…. Aspire. The current Chevrolet Aveo will be replaced by something more like the Aveo RS concept. And the soon-coming Hyundai Accent will inevitably spawn a new Kia Rio.

It should be no surprise to you then that this is one dog-eat-dog segment. Except, no dogs are being eaten. Although it appears as though the Fiesta is struggling, it’s early days. The Kia Rio looks likes it’s down for the count, but in fact, being only 5,000 units behind the class leader means the next-generation Rio stands a great chance at becoming a class leader. This is a tight knit group of contenders, very unlike the midsize segment where the difference between the top-sellers and bottom-dwellers is far, far greater.
One notch up the belt is the compact category where two of America’s favourite cars reside. The Honda Civic and Toyota Corolla were, of course, dominant in June 2010. North of the border, Mazda’s 3 is in a fight with the Civic to be Canada’s best-selling car in 2010. Yet in the States, the 3 is an alternative, not the obvious choice, with the Honda out-selling the Mazda 3 by more than 3-to-1 in June. Hyundai, Chevrolet, and Ford looked poised to make a run for it once the new Elantra, Cruze, and 2012 Focus arrive. 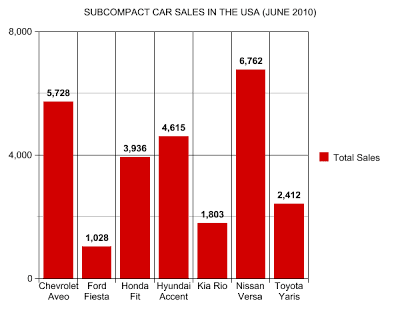 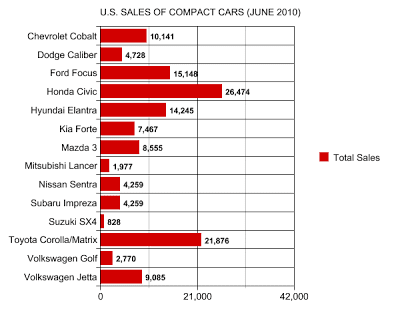