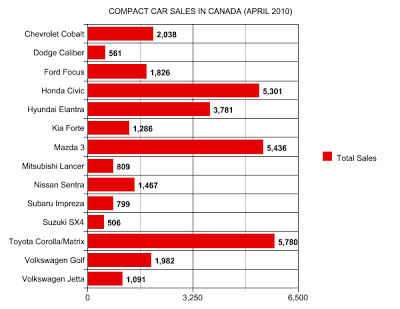 In terms of witnessing the mass purchase of vehicles which…. well, aren’t the best, the compact car category is second only to that of the subcompact car vehicle category. Why? At this price point, each and every month there are thousands of consumers who are on the lookout for the best deal; regardless of the deal that’s available from their favoured automaker or on a recommended car.

This is why you see astoundingly high April sales from a vehicle such as the Chevrolet Cobalt in Canada. First off, the Cobalt isn’t the most desirable vehicle. Second, a new Chevrolet small car is on the way – it’s called the Cruze, and it looks to be a nice ride. In light of a vastly improved Chevrolet product on the way, why did consumers flock to the outgoing Cobalt in April? Deals. Deals, my friends. Deals.
Also known as incentives, they mean much more to a buyer interested in spending less than a certain (low) dollar figure per month. These are often younger, less experienced drivers who spend more on insurance and sacrifice a chunk of their income to cover debt each month. $5,000 off a car they didn’t really want in the first place? They’ll take it. However, and a big however it is, Mazda and Honda and Toyota know how to attract customers with 0% financing or cash back deals, too. Plus, they have the better product.