Selling small cars in the United States is a challenge fit for a company built to withstand rejection and tolerate small profit margins. But a rough domestic economy and gradually rising fuel prices have combined to force many Americans into a downsizing situation. Fortunately small automobiles – commonly known as compact cars – aren’t the punishing transportation devices they were in decades past.

Equipped properly, compact cars of 2010 do a very credible impression of a midsize car. You want leather interiors? You can have’em. Multi-speaker stereo systems? Of course. Space to stretch out? In some cases; yes. A serene driving experience? Quite possibly.
Most famously, the 2010 Toyota Corolla (and its more desirable Matrix hatchback equivalent) and 2010 Honda Civic fit the role of a small family car. But with impressive fuel economy and a lower MSRP, the Corolla and Civic make the Toyota Camry and Honda Accord look bloated and overpriced. Sales Stats from the month of March for the vast majority of compact cars can be seen in the Graph below.
Vehicles like the Kia Soul, Nissan Cube, Chevrolet HHR and Scion xB have been left out mainly for space considerations. If desired by The Good Car Nation, The Good Car Guy can find a way to squeeze vehicles of their ilk into the Compact Car Sales Graph for April or a separate version next time around. 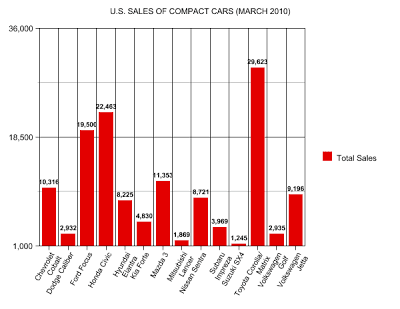