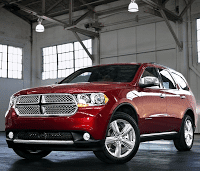 After looking at Chrysler’s absolute reliance on trucks and minivans in the United states, you’d be forgiven for thinking it couldn’t get any worse. South of the border, 28.3% of all Chryslers (including Dodges and Jeeps) purchased in the first eleven months of this year were traditional cars of some kind: either the Chrysler 300, Sebring, or PT Cruiser or Dodge Charger, Avenger, Caliber, Challenger, or Viper.

In November, in Canada, only 7% of all Chrysler products sold were cars. Now, you may have heard that Chrysler Canada is faring well. In reality, Dodge is doing alright overall. Jeep is cruising along nicely thanks in no small part to the excellent new 2011 Jeep Grand Cherokee. But Chrysler, a brand with no SUVs or trucks to speak of at this time, sold just 604 vehicles in November in Canada, down 44.6% from November 2009.

Indeed, Chrysler Canada’s numbers without cars wouldn’t be much different than they are with cars. 35.4% of the company’s November sales in Canada came from minivans. 28.6% came from the Ram pickup as a result of its 4372 buyers. In all, 93.1% of all Chrysler Canada sales from November would remain even if Chrysler Canada became a no-car company like, er… Jeep.

Rather apparently, Chrysler Canada doesn’t have anything to worry about right now, at least in terms of overall sales figures. Year-to-date, the company is up 28%. November 2010 showed a 34% improvement on November 2009.

On the other hand, it’s worth imagining a doomsday scenario in which a post-Katrina-like spike in fuel prices is capped off by a gradual but constant rise in fuel prices, not the kind that makes one or two months worth of buyers buy a slightly smaller vehicle than they intended. Imagine gas prices at $2.10/litre. Chrysler’s car options include the Dodge Caliber; a favourite of no discerning car buyer; a couple of dreadfully ugly rehashed midsize sedans, two gargantuan large cars, and the 2011 Fiat 500, a niche product at best. Imagine truck sales falling off a cliff as pickups are picked up only by buyers who need them. Jeep struggles to shift the Grand Cherokee and Wrangler. Perhaps minivan sales stay steady since some families still require space. And for those who want cars? Even in current circumstances, Canadian car buyers just don’t look to Chrysler. 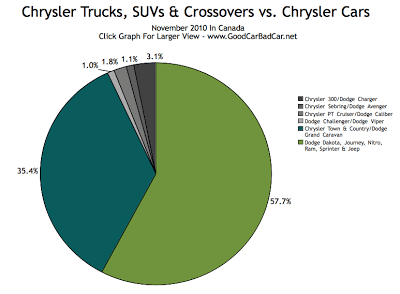 Now, on a final note, it should be made clear that November (and October, and maybe December) was a transitional month for Chrysler Canada. Revamped 2011 models of the 300, Charger, Journey, Compass, and Grand Caravan are on the way but aren’t proficient in locating buyers yet. Yet every car in Chrysler Canada’s lineup except the Chrysler Sebring Convertible (+38.1%) and Dodge Challenger (+19.2%) has posted declining sales in the first eleven months of 2010. The Sebring sedan is down 41.3%. The Dodge Avenger is down 42.1%. Dodge Caliber sales are down 27.5%. Chrysler 300 sales were up 9.2% in November…… but are down 22.4% in 2010. Dodge Charger sales are down 4.3% this year. Also, Jeep Liberty and Jeep Compass sales are falling.

A handful of models are carrying Chrysler Canada. That just is not safe.