The first Ford Fiestas sold in the United States since 1980 were picked up by excited owners in June 2010. Although it at first appears as though Fiesta sales were a drop in the bucket (and they were), Fiesta supply was low. It would be surprising if July 2010 sales didn’t show the Ford Fiesta at least equalling the Chevrolet Aveo.

The Chevrolet Traverse continues to pick up momentum. Joining the Traverse in America’s Top 10 Best-Selling SUVs list were the Chevrolet Equinox and Ford Escape. As for America’s best-selling cars, the Ford Fusion, Chevrolet Malibu, and Ford Focus were hot enough in June to crack that list. And for the second month in a row, the Ford Mustang out-sold Chevrolet’s Camaro in total U.S. sales. Cheaper, lighter, smaller, and just as quick, the 2011 Mustang looks set to win this battle in the months to come, as well. 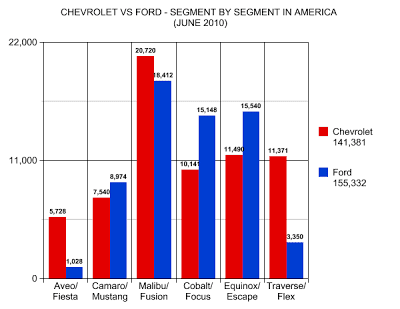