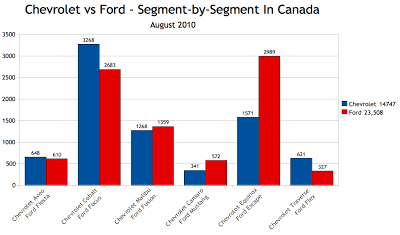 Chevrolet vs Ford : Bowtie vs Blue Oval – August 2010 In Canada

Chevrolet and Ford are like the Yankees and the Red Sox, only without the outlandish loyalty. Even in Canada, a country which can’t lay birthplace claim for either Chevrolet or Ford, the strength of Chevrolet and Ford is downright forceful.

Despite Ford Canada’s huge lead over Chevrolet in August 2010, the next closest brand to Chevrolet was Dodge. Including Ram, Dodge sales were a Mercedes-Benz month’s worth of sales behind Chevrolet. Toyota was nearly 1,000 units back of Dodge. But lumping Chevrolet’s Canadian performance in with Ford is terrifically unfair to Ford.

GoodCarBadCar.net doesn’t even include pickup trucks in this Graph because the Ford F-Series’ dominance is so…. total. Even when paired with the GMC Sierra, the Chevrolet Silverado didn’t measure up to the F-Series in August. Though the 2011 Ford Fiesta can’t muster the volume of the soon-to-be-replaced 2010 Chevrolet Aveo; in spite of the Ford Focus’s loss to the Chevrolet Cobalt and the Ford Flex’s spanking at the hand of Chevrolet’s Traverse, such are the victories of vehicles like the Ford F-Series and Ford Escape and Ford Edge that Chevy doesn’t appear able to out-sell Ford. Not even able? Ouch.

Details of a few direct rivals are below.