Going back to April, average sales of the Jeep Wrangler in 2010 in Canada were standing at 1273 per month. In September 2010, Jeep Wrangler sales dropped to 602, not nearly enough to place the 2010 Jeep Wrangler among Canada’s best-selling SUVs. What happened? Actually, normality kicked in. Despite the drop from 731 sales last September to 602 last month, Wrangler sales are still up 68.6% year-to-date in 2010.

Do the poor Canadian sales of the Toyota Prius and Honda Insight spell doom and gloom for the 2011 Chevrolet Volt and 2011 Nissan Leaf in the Great White North? Out-of-the-ordinary hybrids have been mostly rejected in Canada, a country which seems to recognize (for the most part) that there’s little-to-no financial benefit from owning or leasing these cars. Prius sales fell 71% in September and are down 22.6% in 2010. The more expensive Volt and Leaf are technofests which make the Prius and Insight seem Luddite-inspired, but still one must wonder: are Canadians ever interested in spending more without gaining something financially?

The U.S. car market was seven times the size of the Canadian market in September 2010. Sales of the 2010 Toyota Prius in the United States were 74 times stronger. Honda Insight sales were 24 times stronger. Based on these figures, Chevrolet and Nissan’s expectations in Canada should be low. 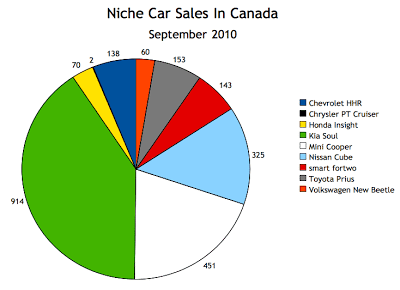 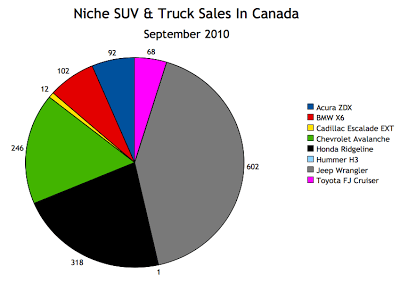