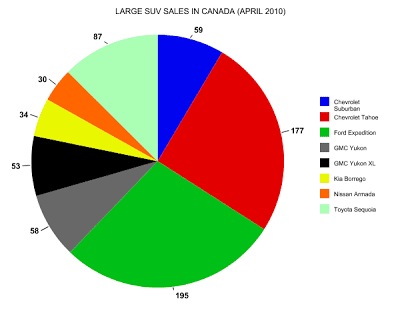 Make sure your inspection of the Graph below is a careful one. Initially, the green slice of the pie, that which is attributed to the Ford Expedition, is the largest slice of all. Join together blue, red, grey, and black and the result is different, however. Canadian sales of the four General Motors jumbo SUVs from Chevrolet and GMC, long-wheelbase and moderately long-wheelbase, were 347 in April.

Of all the vehicles listed in this group of Sales Stats, the Ford Expedition, Chevrolet Tahoe, and Toyota Sequoia were the only SUVs to post improved sales this April. Not that Canadian sales of large SUVs were anything to get excited over in April of 2009. At Chevrolet, for instance, 11 copies of the more fuel-efficient and less-expensive Traverse were sold for every Suburban that went out the showroom door in Canada in April.