CHEVROLET vs FORD, BOWTIE vs BLUE OVAL – MAY 2010 IN AMERICA

Every month in the first third of 2010 the Chevrolet Camaro came out on top of the Ford Mustang in total sales in the United States. Positive press for the 2011 model, in addition to the current Mustang’s obvious value advantage over the Camaro won the May muscle car sales war for Ford, and rather easily as you’ll see in the Graph below.

The 2011 Ford Mustang isn’t the only car that’ll be a help to the Blue Oval in the coming months. Unseen in the Chevrolet vs Ford Sales Stats are figures for the F-Series. The Ford F-150 and its larger brethren posted a 49% increase over May of 2010 – that’s 49,858 F-Series trucks sold in the United States in the 31 days of May. The Ford Fusion has never sold better in any previous May (Chevrolet’s Malibu trailed the Fusion only slightly). Plus, the not-getting-any-younger Ford Escape outshines its much newer rival, the Chevrolet Equinox, even though Equinox sales were plenty strong. 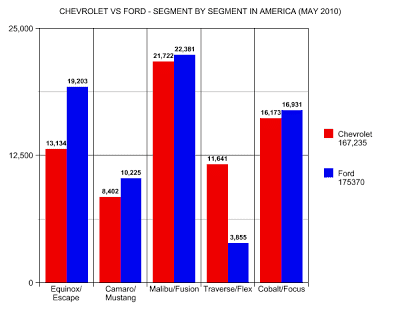