CHEVROLET vs FORD : BOWTIE vs BLUE OVAL : FEBRUARY 2010 IN THE USofA

Although the most famous meeting of rivals in the recent past involves the red, white, and blue of the USA men’s hockey squad and the red and white men’s hockey team from Canada, one hugely consequential competition between the Blue Oval and the Bowtie takes place every month. In January, Chevrolet took care of business with an overall victory plus segment victories with the Chevrolet Malibu, Chevrolet Camaro, Chevrolet Traverse, and Chevrolet Cobalt. The Ford Fusion, Ford Mustang, Ford Flex, and Ford Focus all went back to Dearborn, Michigan, with their tails between their legs.
With Toyota’s recall struggles and resultant sales losses, every other automaker was going to stand a chance to pick up some lost sales. Interestingly, Toyota’s U.S. sales didn’t tumble as much as expected. In Canada, Toyota fared better than in the poor economy of early 2009. Nevertheless, Ford made huge gains in February. As for Chevrolet, an impressive showing was seen there, too.
In the end, of the five categories seen in the Graph below, Ford won back a couple it had lost in January. There’s plenty more Sales Stats yet to come from GoodCarBadCar.net in the next couple days so check back often. 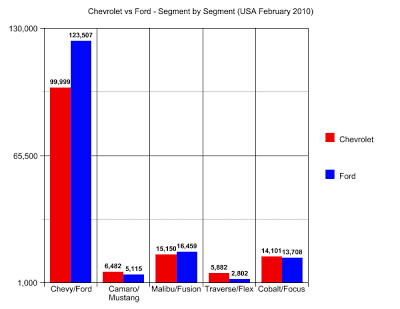