CHEVROLET vs FORD, BOWTIE vs BLUE OVAL – JULY 2010 IN CANADA

Chevrolet and Ford aren’t even direct rivals in Canada. Okay, maybe that’s a bit of an overstatement since, as you can see in the Graph below, there are plenty of Chevrolets and Ford just meant to be cross-shopped. But unlike the United States Marketplace, Chevrolet and Ford sales volumes have little to do with one another. It’s not uncommon to see similar Chevrolet and Ford sales levels south of the border. In Canada, the Blue Oval’s most easily marked rival would General Motors as a whole, not GM’s Chevy division.

Even at that, General Motors only sold 23,902 vehicles in July 2010 in Canada. Ford, without aid from its luxury Lincoln division, beat GM’s total by 2,849 vehicles. The Good Car Guy doesn’t even bother to show Ford Canada’s utter domination in certain segments (such as pickup trucks), not because of the insult it would be to Chevrolet, but because we all know the outcome in advance.
Anyway, the Chevrolet Cobalt did beat the Ford Focus in Canada in July. The real contest in that segment comes once the 2011 Chevrolet Cruze and 2012 Ford Focus arrive. Once Ford Fiesta stock creeps up to appropriate levels, expect the Chevrolet Aveo’s bar to falter. Details on other segments are in the Graph, so check it out. 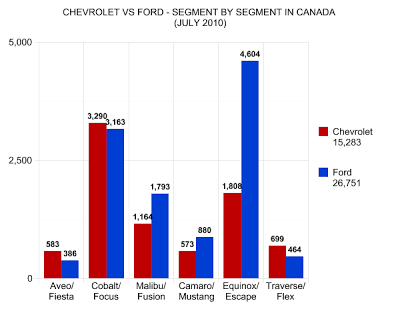