U.S. sales of the Chevrolet Camaro fell 20.6% in September 2010 even as sales of the 2011 Ford Mustang increased 17.1%. Problem for Ford was that Mustang sales in September 2009 weren’t all that hot while 2010 Chevrolet Camaro sales in September 2009 were smokin’. Camaro sales, thus, fell from a very high level. Mustang sales rose, yes, but from not so high a place. Put simply, the Camaro beat the Mustang in September 2010. Moreover, the Camaro’s lead over the Mustang through the first three-quarters of 2010 is 7654 units. You can bet that General Motors will be talking about their muscle car sales victory in January 2011.

Of note, Dodge Challenger sales are up 47% this year. There’s talk of a new Dodge Viper being Alfa Romeo 8C-based, a theory which didn’t hurt sales of the current Viper in September; up 158%. Declining sales (-30% in September 2010) of the far more popular Chevrolet Corvette aren’t surprising to anyone who’s been following the Corvette trend in 2010.
Boring ol’ minivans are where higher volumes are found. Every van in the Graph below posted substantial increases over September 2009’s figures, not a difficult task for the Chrysler Town & Country and Dodge Grand Caravan. September ’09 wasn’t friendly to those twins. Going unmentioned in the Minivan Sales chart are the Kia Rondo (111 sales), Nissan Quest (4 sales) and vans like the Ford Transit Connect, Ford E-Series, Chevrolet Express, GMC Savana, and Mercedes-Benz Sprinter. Together, 19,002 of these commercial-oriented vans were sold in September 2010. 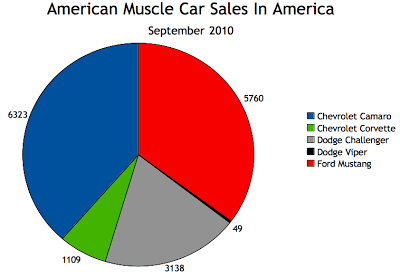 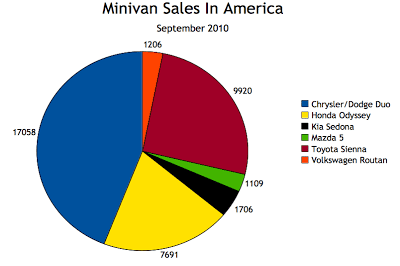