Google may rule the world, but the giant search engine company hasn’t yet invaded the automotive universe. Thus, Toyota remains at the top in U.S. vehicle sales. In the Graph below you’ll see Toyota at the very top of the best-selling 33 auto brands in the United Stats from the year ending December 31st. However, 2009’s totals, if calculated based on conglomerates, would prove a different story. General Motors sold over 2,000,000 automobiles in the United States in 2009. Toyota, with Lexus and Scion’s help, was closer to 1.8 million. Fun facts from this heaping tablespoon of Sales Stats include Buick’s victory over rival Mercury; BMW edging out Mercedes-Benz; and GMC and Jeep sticking to their guns in the top ten. 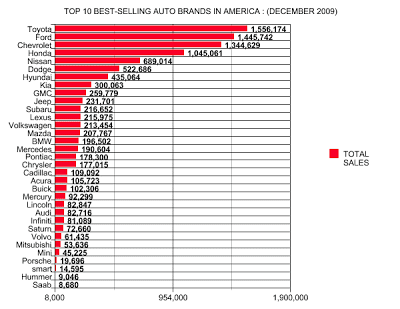