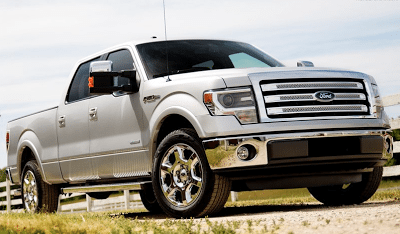 Through eleven months, Ford Canada has already sold 8% more F-Series pickups than the company sold in all of 2012, a record-setting year for the F-Series, which sold in greater numbers than any vehicle line in Canada’s auto selling history. Naturally, the F-Series sits atop this list in which every vehicle is ranked by year-to-date Canadian auto sales.

It’s a list where you’ll see that, after sitting in the 61st, 65th, and 77th positions at this time in 2012, the Chevrolet Orlando, Kia Rondo, and Mazda 5 currently stand as Canada’s 120th, 72nd, and 97th-best-selling vehicles, respectively.

It’s a list where you’ll see that after just two months on sale, the BMW 4-Series, Canada’s 199th-best-selling vehicle, has collected very nearly as many sales as the Nissan 370Z.

That should tell you something about the types of coupes Canadians want to buy, and what available all-wheel-drive can do for a car with sporting intentions. Sales of the Audi A5, even in relatively old age, are up 16%. It’s Canada’s 123rd-best-selling vehicle, up from 128th at this time last year.

It’s a list where, with some simple math, you’ll realize that seven out of every 100 new (non-commercial van) vehicles sold in Canada are F-Series pickups, and seven more sales are accounted for by the Honda Civic and Hyundai Elantra, Canada’s two top-selling cars.

Recent product introductions, from the Jeep Cherokee to the Mitsubishi Mirage to the Mercedes-Benz CLA, have produced vehicles which now rank as the 149th, 191st, and 196th-best-selling vehicles in Canada, respectively. They’re up from the 237th, 210th, and 213th positions a month ago.

There were exciting improvements introduced in last month’s rankings of vehicle sales. Prior year figures now include the actual numbers from last year, not just the percentage increases/decreases from last year. As a result, we’ve also included vehicles like the Honda Element and Lexus HS250h, nameplates which collected sales in 2012 but not this year.

More importantly, there are now visible brand results, so when you sort the table by vehicle names to showcase, for example, all GMCs together, you’ll also see the GMC brand’s total. Manufacturers are shown in bold to differentiate makes and models. At any time, click the Rank column to return to the original format. If you’re on a mobile device, you may need to choose the full version of the site (at the bottom of the page) in order to use the sortable function.

Reminder: these are year-to-date rankings, but you can sort vehicles by November volume by clicking the November 2013 column header, or you can rank vehicles by improvements or declines using the % columns. Or, most importantly, you can list automakers together by selecting the Vehicle column header. Just remember, the list is horizontally flipped from the norm: YTD on the left, monthly data on the right.

Source: Automakers & ANDC
Red font indicates year-over-year declining sales
* Italicized unranked lines are nothing more than available breakdowns, already included in the model’s total, not in addition to the model’s total.
^ Brand total includes sales of commercial vans. Dodge/Ram sales figures are isolated here.
¹ Chrysler markets the Ram not as a Dodge but as a Ram, but we show it and the SRT Viper here as Dodges so you can see the vehicles with like-minded products when you sort vehicles alphabetically using the Vehicle column header.
² Total Prius Family sales: down 40.1% to 449 in November, down 20.5% to 7492 YTD.
³ Total Santa Fe sales: up 10.5% to 2645 in November; up 28% to 27,414 YTD.
† Mini Cooper includes sales of the Hardtop, Convertible, Clubman, Coupe, Roadster, and Paceman.
‡ Total Genesis sales: up 1.1% to 188 in November, down 3.8% to 2764 YTD.
± Total Infiniti G/Q50/Q60 sales: Up 88.9% to 272 in November; down 0.9% to 2861 YTD. Total G sedan and Q50 sales: Up 115% to 245 in November, up 6.9% to 2373 YTD.
¤ Automakers release sales figures for the E-Class and CLS-Class together, S-Class and CL-Class together, RL and RLX together, Passat and CC together.
º Land Cruiser is a commercial vehicle in Canada. Audi’s A4 sales data includes sales of the Allroad.
Sales data for brands such as Ferrari, Lamborghini are unfortunately not broken down by model. estimates say sales for those brands in November were 18 and 4, respectively, 196 and 42 YTD . Total Maserati and Bentley volume is reported, but not by specific models. It is believed that Tesla sold 504 copies of their Model S during the first nine months of 2013, but Tesla doesn’t issue monthly sales reports.
RECOMMENDED READING