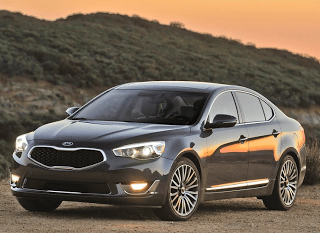 Inspired by the Kia Cadenza that’s currently parked in the driveway at GCBC Towers, take a closer look at the latest big Kia’s Canadian sales performance. South of the border, Cadenza volume rose 63% from June to July. In Canada, Cadenza volume grew 140% to its highest level yet. But with just 24 sales last month, Kia’s year-to-date total rose to only 62 units, and its ranking among all vehicles didn’t rise above the 236th position.

Kia Canada has been selling the Cadenza since the end of April. Jaguar has only been selling the F-Type roadster for three months but the Jag has sold nearly twice as often. Keep in mind, this isn’t just a matter of desirability: Kia Canada doesn’t have 1000 Cadenzas sitting on their dealer lots. Big, mainstream-brand sedans, however, aren’t common items in Canada.

The Chevrolet Impala, America’s 23rd-best-selling vehicle, is Canada’s 90th-ranked vehicle. The Cadenza’s partner from Hyundai, the Azera, isn’t even marketed in Canada. That the Cadenza, pleasant and handsome as it is, isn’t putting up big numbers in Canada shouldn’t surprise you. That the Cadenza is rarer than the F-Type is nevertheless a strong statement about the future of $40K cars from volume brands. BMW Canada sold 1391 copies of the 3-Series. In July.

A different new car made plenty of headway in July. From its ranking of 238th in June, the Fiat 500L moved up to 206th in July 2013. Elsewhere at Chrysler, the 300 slid eight spots. The Honda Civic overtook the Hyundai Elantra, and Ford’s top-ranked F-Series grew its lead to 21,917 units. The second-ranked Ram P/U is 90 sales up on the GM twins, combined.

These are year-to-date rankings, but you can sort vehicles by July volume by clicking the July 2013 column header, or you can rank vehicles by improvements or declines using the % columns. Or, most importantly, you can list automakers together by selecting the Vehicle column header. Just remember, the list is horizontally flipped from the norm: YTD on the left, monthly data on the right.

Italicized unranked lines are nothing more than available breakdowns, already included in the model’s total, not in addition to the model’s total. Sales data for brands such as Ferrari, Lamborghini are unfortunately not broken down by model. estimates say sales for those brands in July were 18 and 4, respectively, 124 and 26 YTD . Total Maserati and Bentley volume is reported, but not by specific models.* Notes: Total Santa Fe volume is up 24% to 16,524 this year, up 36% to 2813 in July. Mini Cooper includes sales of the Hardtop, Convertible, Clubman, Coupe, Roadster, and Paceman. Total Prius Family sales are down 22% to 4927 this year, down 4% to 852 in July. Total Genesis sales are down 12% to 1835 this year, up 30% to 315 in July. Land Cruiser is a commercial vehicle.