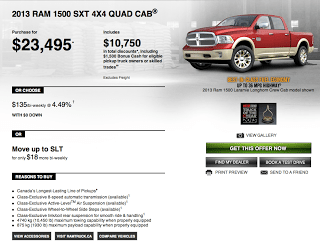 Canadians registered 5632 more new pickup trucks in April 2013 than in April 2012, a 22% year-over-year increase. The best-selling vehicle in Canada, Ford’s F-Series, accounted for 38.3% of the truck market.

Together, Detroit manufacturers were responsible for 93.2% of the industry’s pickup volume in April 2013. Eight full-size trucks brought in 95.5% of buyers, and of those 29,957 sales, 97.5% belonged to the six Detroit trucks from Ford, Ram, GMC, Chevrolet, and Cadillac.

Through four months, Canada’s overall new vehicle market has grown 1.4%. Truck sales, however, are up 9.9%, or 8993 units. This increase has occurred not just in a mostly stagnant market but in spite of the disappearance of the Ford Ranger and Dodge Dakota and the 2634 sales they brought in during the first four months of 2013. Meanwhile, GM’s two small trucks have nearly disappeared – the pair has jointly sold 1303 fewer copies this year than last.

If we exclude those four trucks from the equation, Canada’s desire for the eleven remaining trucks has grown by 12,930 units in just four months, a 14.9% improvement. How has the Ranger’s death affected Ford? Ford truck volume is up by 3614 units without the Ranger. Even if we go back to the first third of 2010, when Ranger sales in Canada were much healthier than they were a year ago, Ford only sold 34,781 pickup trucks in total, 3105 fewer than they did with “just” the F-Series this year.

It helps that Ford is very publicly offering $9250 in rebates on the F-Series, while Ram is advertising a $10,750 discount on the 1500 SXT 4×4 Quad Cab, and GMC’s offers include $9500 off the Sierra. These discounts have become so much the norm that Canadians don’t even notice the incentives anymore. Trucks are simply supposed to cost way, way less than MSRP in 2013.

Canada’s emphasis on trucks is outsized; even disproportionately vast. As I mentioned yesterday on The Truth About Cars, Canada accounts for 10% of U.S./Canada auto sales but 13% of U.S./Canada truck sales.

As always, you can find historical monthly and yearly sales figures, both Canadian and U.S., by clicking the model name in the table below or by selecting a make and model at GCBC’s Sales Stats page. More Canadian Best Seller lists – for cars, SUVs, overall vehicles, luxury vehicles etc. – will be published in the coming days as data becomes available.