Of the 8338 minivans acquired in Canada last month, 68% were driven away from Chrysler/Dodge dealerships.

While that sounds like terrific market share, Chrysler Town & Country sales were actually down 31% year-over-year. Town & Country sales are up 5% year-to-date. The Dodge Grand Caravan, on the other hand, posted a 47% increase in August 2011. Grand Caravan sales are up 4% through the first eight months of 2011. Dodge’s version of the Windsor, Ontario-built minivan was Canada’s second-best-selling vehicle in August.

If you consider the Grand Caravan and Town & Country to be one product, Chrysler’s minivan duo then forms Canada’s second-best-selling vehicle this year with 42,967 sales, 687 units ahead of the Dodge Ram pickup.

In other minivan news, Canadian sales of the Honda Odyssey were down 47% in August. Kia’s Rondo and Sedona were down 41% and 40%, respectively. Mazda 5 sales plunged 45%. Nissan Quest sales rose 10,200% compared with August 2010 but, more importantly, jumped from 61 in July to 103 in August. The Toyota Sienna slid 6%. Volkswagen’s Grand Caravan-based Routan was down 32%.

If 8338 minivans sounds like a large total for a country of 34 million people (minivans grabbed 6% of the overall new vehicle market in August) consider the force pickup trucks exert over the buying public. 27,573 pickup trucks were sold in August. The Ford F-Series out-sold all minivans combined. 36% of all trucks sold last month were of the F-Series variety. F-Series sales were down 8% from August 2010.
Dodge Ram sales slid slightly, just 31 units lower than in August 2010. The Chevrolet Silverado, Canada’s fourth-best-selling truck, was off by 10%. GM’s more popular full-size truck, the GMC Sierra, improved by 14%.
Smaller trucks, a group which still includes the Ford Ranger as well as the Toyota Tacoma and worst-selling Honda Ridgeline, accounted for just 12% of all pickup truck sales last month. It’s worth noting that potential buyers of the Ford Ranger and Dodge Dakota could take solace in some other truck when they’re ready to trade in, but will it be another small truck, a Nissan Frontier or Honda Ridgeline? Or will they simply move up to the clearly more desirable Ford F-150 and Dodge Ram?
Imagine the overall market remains the same and Ranger/Dakota customers opt for something full-size next August. That would mean only 7% of all truck sales would come from the smaller side, a figure which would likely continue to shrink as time goes by and automakers give up on a dying segment. 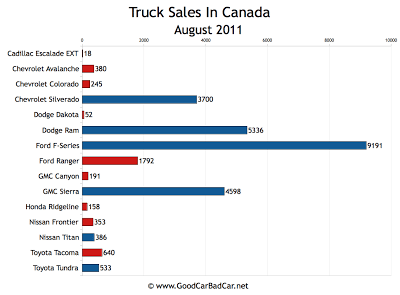