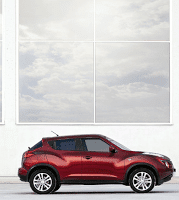 Let’s say, for instance, after excluding the Hyundai Santa Fe and Kia Sorento from the equation – they’re inexpensive but not really small at all – and removing the Mini Countryman and Nissan Juke because you don’t feel they qualify as anything more than cars, you still have 24,832 small SUV sales in Canada from June 2011. Now, with nearly 25,000 small utility vehicle sales there’s one for every 1390 Canadian residents. Small SUVs were sold at a rate faster than every two minutes last month, and that includes all the minutes car dealerships weren’t open, too. For every Tim Hortons coffee shop in Canada, eight June 2011-registered small SUVs were ready to enter the drive-thru.

Leading the pack, as usual, was the Ford Escape, with 23% of those sales. The Chevrolet Equinox ranked second, but a General Motors combo including the GMC Terrain would have placed GM even closer to the Escape with 4213 sales between them. No small SUV or crossover posted a greater year-over-year gain the Kia Sportage, up 200% to 778. No decline was worse than the dying Honda Element’s 62% plunge, although the Suzuki Grand Vitara’s 50% drop is pretty awful.

Small SUV sales statistics for Canada in June 2011 are in the chart below. Keep on scrolling for data on midsize and large sport-utility vehicles and crossovers. 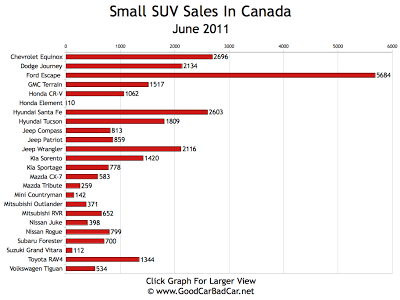 Ford isn’t just dominant with its smallest SUV; the larger Edge easily tops all rivals. In fact, the next-best is also a Ford, as the 2011 Explorer is proving to be pretty freakin’ popular. Plus, Ford sold 502 copies of the handsome (to my eyes) Flex. That’s 3938 midsize Ford SUV/CUV sales, a figure that stacks up nicely against GM’s Lambda platform and its 1722 Enclave/Traverse/Acadia sales, or Chrysler’s 1422 Durango/Nitro/Grand Cherokee/Liberty sales.
The Jeep Grand Cherokee was at the top of the heap in June in terms of year-over-year gains. 420% gains aren’t easy to come by. The Nissan Xterra, for example, was next-best on these grounds with a not insignificant 133% bump. Toyota 4Runner sales fell 41%, the worst drop among midsize sport-utes and CUVs. FJ Cruiser sales dropped 37%. The Honda Pilot was down 32%. Midsize SUVs are charted below; scroll a little more for notes on the biggest sport-utility vehicles. 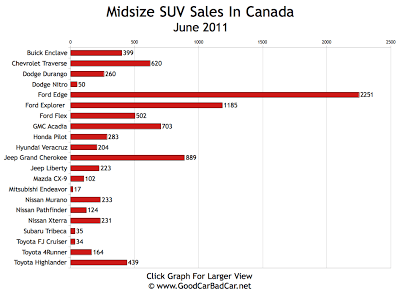 There are 651 sales represented in the pie chart below. 50% of those sales belong to General Motors. 52% of GM’s large SUV sales were fleet purchases. Fleet numbers aren’t available for the four other nameplates.
The Ford Expedition was down 6%. Kia Borrego sales slid 23%. The Nissan Armada and Toyota Sequoia were up 44% and 7%, respectively. 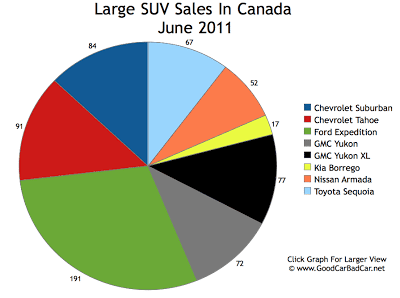