Mitsubishi began selling the RVR in Canada last September. Because there were only 13 sold in the ninth month of 2010, Mitsubishi’s 646-unit sales performance last month brought about a seemingly amazing 4869% year-over-year increase. RVR sales were up 56% from August’s 415-unit total.

Kia Sportage sales jumped 182%. Sales of Kia’s larger utility vehicle, the Sorento, were up 80%. Hyundai reported a 67% increase in Tucson sales. Mazda even managed to find an improvement in Tribute sales as the company’s soon-to-be-replaced Escape copy posted a 35% improvement.

On the flip side, the defunct Honda Element slid 78%. Suzuki reported a 55% drop in Grand Vitara sales. Hyundai’s Santa Fe was down 40%. Sales of the Toyota RAV4 fell 38%. The Volkswagen Tiguan was down 36%.

In between the RVR, Sportage, Sorento, Tucson, Tribute, Element, Grand Vitara, Santa Fe, RAV4, and Tiguan are all the other utility vehicles in the first chart you’ll scan below. Canada’s best-selling small SUV is the Ford Escape. By some measure, the Escape is also Canada’s best-selling SUV overall. 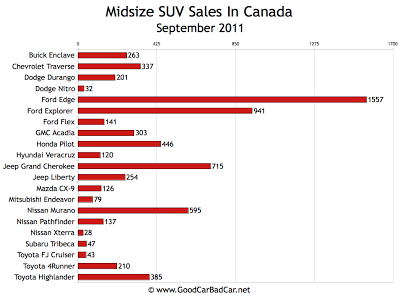 Scanning September 2011’s auto sales data for similar information on midsize SUVs finds the Ford Explorer’s 215% year-over-year increase to be peerless. Mitsubishi Endeavor sales jumped 132%, but that only works out to a 45-unit increase. Ford sold 642 more Explorers this September than last. Nissan Murano sales more than doubled from 287 to 595. The Subaru Tribeca’s 62% jump was worth 18 extra sales.
On the negative side of the ledger, Nissan Xterra sales slid 82%, enough to land the off-roader on GoodCarBadCar.net’s Worst-Selling Vehicles list. Ford Flex sales fell 46%. The Jeep Liberty was down 38% and Toyota’s FJ Cruiser dropped 37%. Canada’s overall new vehicle market was down by less than half a percentage point in September. 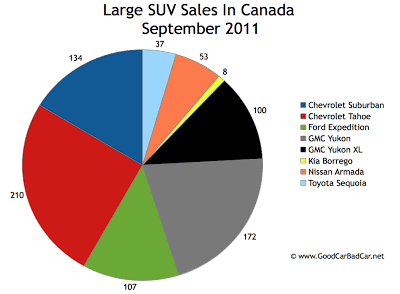 You won’t find that many new jumbo sport-utility vehicles were added to Canadian roads in September 2011. Three out of every four sold – there were 821 in total, including the Kia Borrego – were built by General Motors.
Chevrolet Tahoe sales jumped 116%. Ford Expedition sales jumped 265. The Chevrolet Suburban fell 24%. GMC Yukon and Yukon XL sales were up 8% and 14%, respectively. Kia Borrego sales slid 70%. Nissan Armada sales climbed by 15 units, or 39%. The Toyota Sequoia lost just over half its volume.