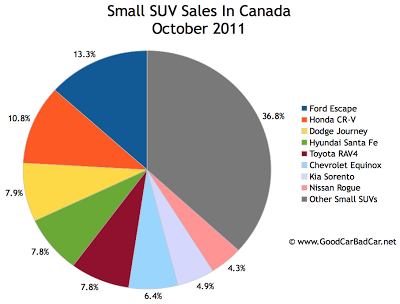 It’s difficult to figure out what Ford will do, and be able to accomplish, with the 2013 Ford Escape. If it’s priced like the nicer, improved vehicle that it is, surely Ford won’t be able to maintain the volumes put up by the current, outdated, value-oriented Ford Escape. 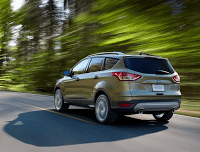 Ford sold 3313 Escapes in Canada in October 2011, up 2% from last year. So far this year Escape sales are up 5%. The cost of developing the current Escape has long since been recovered and, despite the low price at which Ford sells Escapes, the company’s smallest SUV must still be a tremendous source of income. If Ford increases the price of the upcoming Escape, one would assume sales would decline, thus lessening Ford’s revenue just as the company wants to pay off the development of the new vehicle. But can Ford afford to to keep the price low on a vehicle filled with new technology, technology which must cost a pretty penny? This is a worry for another day, a worry for Ford executives, not Ford Escape buyers. There’s an image comparison of the handsome new Escape and the old SUV-shaped Escape here.

Among the Escape’s competitors, harsh declines were reported by the Mitsubishi Outlander, which fell 45% as the RVR steals sales. The Suzuki Grand Vitara and poorly-stocked Hyundai Santa Fe were also down hard. Honda CR-V sales shot up 83%. Subaru Canada had its best ever month with the Forester as sales rose 51%, driving the Forester onto Canada’s best-selling SUVs list. The increases posted by the RVR and Nissan Juke mean little – both are successful, yes, but they were new to the market at this time last year.

Details on all small and smallerish SUVs and crossovers are in the table below. Market share numbers for the most popular among them can be seen in the chart above. Midsize and large SUV sales figures can be viewed after the jump.

The Ford Edge suffered a 17% loss in October but still managed to top its rivals, the inexpensive Hyundai Santa Fe and Kia Sorento excepted (and listed above). Edge sales are down 6% this year. The newer, fresher Explorer likely isn’t a help to the Edge, although it’s certainly a help to Ford Motor Company. Explorer sales jumped 368% in October 2011.

The Explorer’s old arch rival, Jeep’s Grand Cherokee, slid 23% in October but still finished the month 220 sales ahead of the Explorer. Through ten months the Jeep Grand Cherokee leads the Ford Explorer by 341 sales. GM’s Lambda platform trio – Buick Enclave, Chevrolet Traverse, GMC Acadia – have collected 12,200 sales, fewer than the Ford Edge but more than the Explorer and more than the Jeep Grand Cherokee/Dodge Durango duo. Sales figures on all midsize SUVs are in the table below. Keep scrolling for the jumbo sport-utility vehicle report. 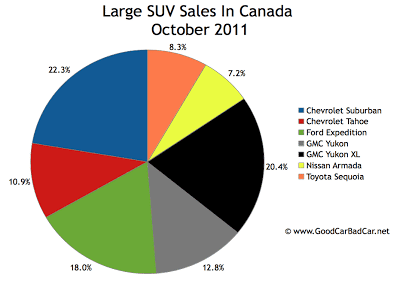 Five of seven jumbo SUVs available to Canadians posted increased sales in October. This means pretty much nothing. Large SUV volume is ultra-low in Canada, particularly when you consider how many Chevrolet Suburbans were sold in America in 2002. Holy cow.

Suburban sales were up 76% in October but are down 20% this year. The segment-leading Ford Expedition is up 11% this year. Leading? The Expedition isn’t, not really. GM’s four Expedition rivals have combined to sell 2.6 times for every single Expedition sale. And that six-tenths of a Tahoe (or Yukon, Suburban, Yukon XL, whatever) isn’t such a bad deal. 60% of a jumbo SUV is still a whole lot of vehicle.