There aren’t very many small SUVs or crossovers that wouldn’t be considered somewhat successful, relatively speaking. Not many analysts would have projected 325 Nissan Juke sales per month, an average which was soundly topped by the Juke’s 429-unit July. Between the not-so-small Santa Fe and Sorento, as well as the Tucson and Sportage, Hyundai and Kia found 6217 buyers in Canada in July. That’s up 28% from last July and represents 4.4% of all July new vehicle sales in Canada.

The exceptions? The Suzuki Grand Vitara was one of Canada’s worst-selling vehicles last month. Honda’s Element experiment ended up as a marketplace failure. Mini Countryman volume, always expected to be low, is on the low side of low. And despite gains made on the Compass side, Jeep’s two baby utes don’t measure up to the rugged ol’ Wrangler even as a combined unit. On the other hand, it’s not as though they’re hindering the Wrangler’s growth. Jeep’s oldest model was up 28.3% in July.
Aside from the disappearances (barely) felt by the loss of the Jeep Commander and Chrysler Aspen, no SUV sales decline among vehicles listed in the chart below has been more harsh this year than the Dodge Nitro’s 52.7% drop. Nitro sales fell from July 2010’s 81 to 76 in July 2011. Ford Flex sales are down 40.8% this year. Through seven months, the Mitsubishi Endeavor is off last year’s pace with a 37.6% decline.
Terrific gains include the Dodge Durango’s 71,100% bump. Somehow Chrysler Canada dealers still had two Durangos to sell between January and July of last year. Jeep Grand Cherokee sales have jumped 135% this year; 173% in July. Sales of the new Ford Explorer have nearly doubled, up 96% so far this year. 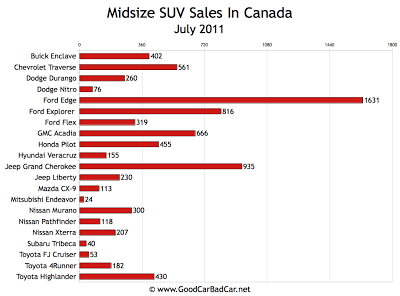 Sales of the biggest and boldest mainstream brand sport-utility vehicles aren’t particularly healthy but there were exceptions in July. Ford Expedition sales rose 49.1% to 170. The Nissan Armada was up 73.1%.
Sales of GM’s stretched versions, the Chevy Suburban and GMC Yukon XL, were actually slightly better this year than last, too. Tahoe and Yukon sales, however, dropped 46.4% and 60.1%, respectively. Together, the four are down from 3249 sales in the first seven months of 2011 to 2384 in the same time period this year. 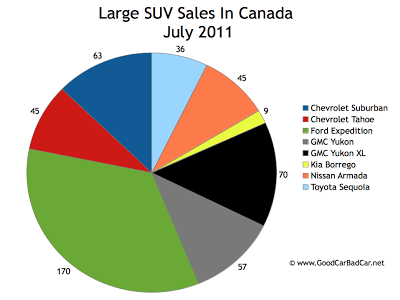