From Nanaimo to Ecum Secum, Canadian roads are filled with SUVs and crossovers of all types. Excluding the higher-end luxury pieces seen here and here, 25,071 of these vehicles were sold in January 2012 in the Great not-so-White North, equivalent to 25.7% of the Canadian new vehicle market. 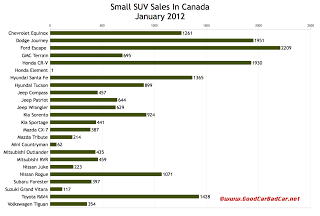 The leader of the pack can be seen in the first table after the jump: Ford Escape sales tumbled 26% to 2209, 258 more than the total put up by the second-ranked Dodge Journey. Among smaller utility vehicles, only two still-living-and-breathing nameplates suffered worse year-over-year drops than the Escape. Nissan Juke sales slid 33%; Subaru Forester sales plunged 36%.

Certain bigger SUVs and crossovers fared much worse last month. The Chevrolet Traverse fell 46% to 226 sales. Toyota’s FJ Cruiser was down 42% to 43. Falling sales are a common theme for the FJ. In nine out of twelve months in 2011, sales were down. Yearly totals have fallen every year since the FJ Cruiser went on sale in 2006. Toyota’s focus of late has clearly been on expanding hybrid technology rather than improving the FJ with the mission of providing Toyota clients with a real Jeep Wrangler alternative.

For a look at specific January 2012 Canadian sales data on smaller, midsize, and large SUVs, click past the jump. Click any chart in this post for a larger view. You’ll find monthly and yearly sales data for all these models and every other vehicle currently on sale by accessing the dropdown menu at the top right of this page or by visiting GoodCarBadCar’s Sales Stats home. 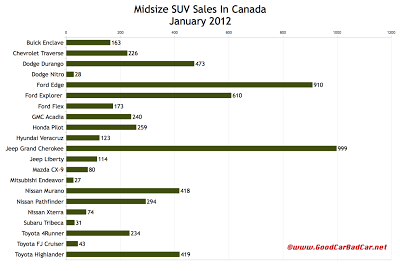 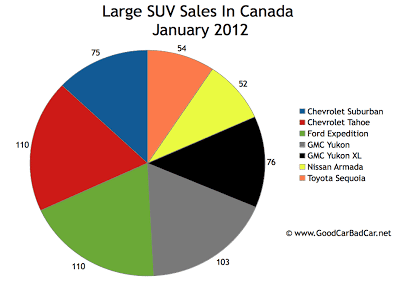