Only 511 jumbo truck sport-utilities were sold to Canadian new vehicle buyers in August 2011. The same eight nameplates found 1104 buyers in August 2010. Much of that decrease comes from the GMC Yukon, sales of which fell 86% (enough to be on yesterday’s Worst Sellers list) from 552 to 78.

That said, every other vehicle on the list except the Nissan Armada and Toyota Sequoia suffered from year-over-year declines, as well. And the increases reported by the two Japanese-badged sport-utes amounted to only 18 units. 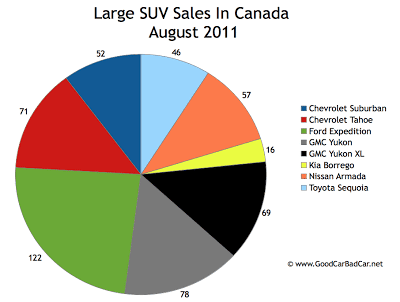 There are plenty of very big “midsize” SUVs and crossovers which take up an awful lot of space on the road. GM’s Lambda platform crossovers combined for 1542 sales last month. Together, the three beat the two-row Ford Edge, although Ford found 780 additional Explorer customers (up 130%) and 212 Flex clients (down 35%).
Consider the new Dodge Durango, an SUV which surely seems more than big when it appears on the rearview mirror of your Yaris. The Durango hasn’t really taken off in Canada, but its partner, the Jeep Grand Cherokee, helped the platform find 913 sales for Chrysler Canada in August. Quite clearly, that pair roundly out-performs all jumbo SUVs combined. 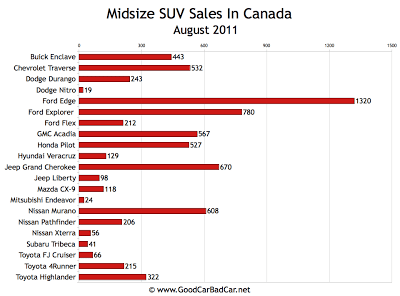 Finally we find the truly popular utility vehicles, the smallest bunch. Some of these feature three rows or stretchier overall length, the kinds of things that could see them moved into the midsize SUV sales chart above. Based on MSRPs, however, the vehicles in the chart below are direct rivals in a segment that’s still growing by leaps and bounds.
Canada’s new vehicle market improved at a 3.2% rate in August 2011, as compared with August of a year prior. Sales of the vehicles below rose 28.9% from August of last year to August of this year. Their portion of the overall market jumped from 15.5% to 19.4%. While it’s true that there are a handful of additional models, even without those models (Countryman, RVR, Juke) the small SUV market increased by 5234 sales.
That 5000+ unit increase is greater than the overall new vehicle market’s 4305-unit bump. And it occurred despite Toyota RAV4 sales which slid 40%, Volkswagen Tiguan sales which slid 35%, and Suzuki Grand Vitara sales which were down 60%. 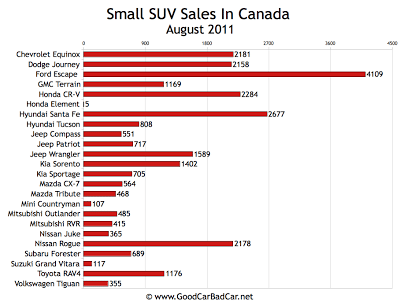