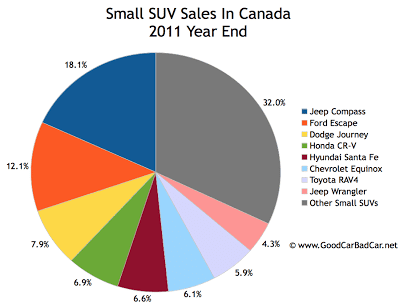 In 2011, 34,285 people walked into General Motors dealerships in Canada and acquired either a Chevrolet Equinox or GMC Terrain. That statement proves just how successful the Ford Escape has been in the latter years of the first-gen Escape’s lifespan. Escape sales rose 2.8% in 2011, a year in which the overall new vehicle market increased by less than 2%.

On a smaller scale, the RVR championed Mitsubishi to a victory over the Good 12-winning Nissan Juke, a very solid victory. The RVR beat the much more expensive Mini Countryman by 5501 sales, as well.

67% of the smallerish SUVs and crossovers which could possibly report a year-over-year increase in Canadian sales in 2011 did so. The Hyundai Santsa Fe, Jeep Patriot, Mitsubishi Outlander, Subaru Forester, Suzuki Grand Vitara, Toyota RAV4, and Volkswagen Tiguan did not.

After the jump you can see December 2011 and year end sales figures for midsize SUVs and crossovers. Use the dropdown menu at the top right of this page to find monthly and yearly sales figures, both U.S. and Canadian, for all these nameplates and every other vehicle currently on sale. 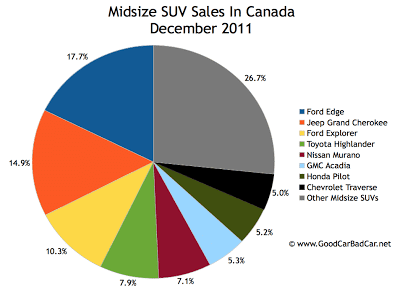 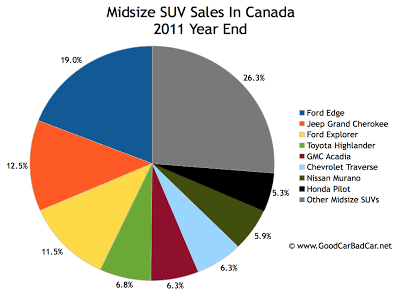